By Newsroom on November 1, 2013Comments Off on Tyrrells On-pack Promotion Offers Bizarre Array of Prizes 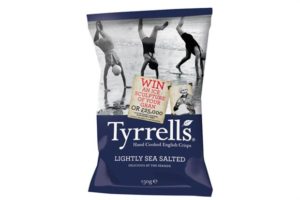 Crisp brand Tyrrells is running an on-pack promotion with a bizarre array of prizes, including Des as a middle name, an “uncomfortably long handshake” and a tattoo of your boss.

Should the winner not be tempted by the 24 money-can’t-buy prizes on offer, they can opt instead for £25,000 in cash.

The promotion is appearing on 5m packs of Tyrrells’ four best-selling flavours (including Lightly Sea Salted and Sweet Chilli & Red Pepper) during the build-up to Christmas.

The brand’s unusual take on sales promotion was conceived following crowd-sourcing and social media activity. The silliness runs though all aspects of the campaign, including the terms and conditions.

Consumers who buy the 150g promotional packs can enter the competition via the Tyrrells website, with social media playing a role in promoting the prizes and generating online chatter.

Oliver Rudgard, Tyrrells’ marketing director, said: “From using our social media followers to help us create the most eccentric prize ideas possible, to writing 24 sets of individual terms and conditions for each back-of-pack (yes, you really can win a tattoo of your boss), we believe that the Tyrrells on-pack competition will be the most entertaining, talked about prize offering this Christmas.

“We always ensure that our packs create real cut through in store and believe this campaign creates a convention-breaking, side-splitting consumer event.”

The packs are going on sale at retailers including Waitrose, Sainsbury’s, Tesco, Budgens and Morrisons.

Other prizes on offer include colouring-in lessons, a pack of lies, a sculpture of your gran, a photo of some soil and your own theme tune.