By Newsroom on July 5, 2013Comments Off on US Man beats Own Hot Dog Eating World Record

A US man has devoured 69 hot dogs, beating his own world record at an annual 4 July competition at Coney Island in New York.

Joey “Jaws” Chestnut ate the sausages with buns in 10 minutes, breaking his old record of 68 and winning the world title for the seventh year in a row. 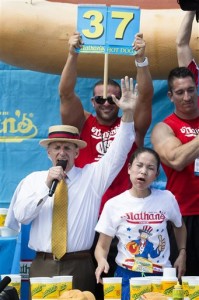 In the women’s contest, Sonya Thomas kept her title with nearly 37 sausages.

The first such hot dog eating contest was held in 1916, when the winner put away only 13 frankfurters.

On July 4, thousands of spectators cheered on the competitors of the 97th Nathan’s Famous Fourth of July International Hot Dog Eating Contest.

“I feel a little full,” Mr Chestnut joked to BBC after his victory. “I’m happy as heck. Things couldn’t have gone much better.”

Meanwhile, Ms Thomas, known as “The Black Widow”, beat her closest competitor by three-quarters of a sausage. But she was not able to match her feat of last year when she ate 45 sausages.

“It was very hot water, maybe too hot,” she said.

The competition contest was broadcast live on sports channel ESPN, and featured much of the fanfare usually reserved for professional sporting events.

US Man beats Own Hot Dog Eating World Record added by Newsroom on July 5, 2013
View all posts by Newsroom →