By Newsroom on February 11, 2016Comments Off on Vintage Dark Chocolate Aged for 18 Months Fetches $345 per Bar

Dark chocolate and wine have a great deal in common. For both, the long road from cultivation to fermentation to production can be seen as a journey of chemical evolution. This is just the beginning of the story. Next there is the matter of storage and ageing, during which the journey continues. Oxygen and other compounds interact with both chocolate and wine over time, continuing the process of chemical evolution for months, years, and, in some cases, decades. 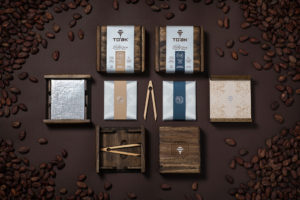 To’ak first made a name for itself by launching a $60 bar of dark chocolate in 2014. Chocolate from this same harvest has been aged for 18 months in a variety of ageing vessels, including a 50-year-old French oak Cognac cask as well as a Spanish Elm wood vessel. Only 200 vintage chocolate bars have been produced. The price is $345 for each 50-gram bar.

To’ak’s co-founders concede that if the science behind wine ageing is still not fully out of the woods, the science behind chocolate ageing is stuck in a cave. To explore this question, they contacted a wide range of wine-makers, master sommeliers, professors of enology, and even molecular scientists. Their findings are revealed in a 116-page booklet that accompanies each engraved box of vintage chocolate.

Dark chocolate and wine are both rich with tannins and other polyphenols. These compounds, also called flavonoids, largely determine what we taste in a wine or dark chocolate and how it feels in our mouth. Over time, these compounds are chemically altered through processes such as oxidation. Aging dark chocolate or wine can allow the perception of astringency to decrease. This can produce a more rounded flavour profile and reveal subtle flavour notes that had previously been overshadowed. To’ak is currently working with enology researchers at Washington State University and U.C. California, Davis, to quantify this process and analyse tannin content of chocolate as it ages. 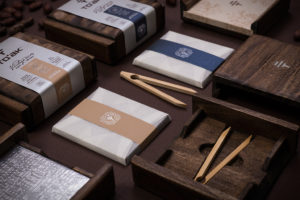 To’ak chocolate is sourced from heirloom Nacional cacao in the valley of Piedra de Plata, Ecuador. It has recently received the prestigious Heirloom Cacao Preservation designation from the Fine Chocolate Industry Association.

Each vintage bar, which weighs 50 grams, is presented in a hand-crafted Spanish Elm wood box that is individually engraved with the bar number. Each box includes a 116-page booklet that comprehensively explores the science behind the ageing of dark chocolate, drawing heavily from the science behind ageing wine. Also included with each box is a pair of hand-made tasting utensils. To’ak Chocolate can be purchased online or at select retailers in the US and at Harrods in London.

Vintage Dark Chocolate Aged for 18 Months Fetches $345 per Bar added by Newsroom on February 11, 2016
View all posts by Newsroom →