By Newsroom on September 18, 2014Comments Off on Walkers Installs Three Twitter-Activated Vending Machines in London

Crisps brand Walkers while finalizing its UK campaign “Do Us a Flavour,” launched in January, to select one winning crowdsourced flavour among six finalists, installed three vending machines — one in Clapham Junction and two in Oxford Street of London — To distribute packs with the new flavours for free. The “trick” of these machines was that they get activated with tweets, and didn’t accept money.

The “tweet-to-eat” vending machines dispensed 260 packs of one of the six limited-edition winning flavours daily. 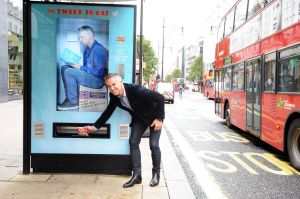 Londoners are invited to tweet @Walkers_busstop to get a free pack, trying as many flavours as possible, and then vote online for the best one here until October 17, 2014. The vending machines worked in the streets of London until September 11, and the overall winning flavour that is to launch into mass production will be announced on October 20.

In addition to the outdoor experience, the campaign also ran on the radio Capital FM for two weeks (media buying by OMD UK) as well as on Youtube with short clips by AMV BBDO, featuring the frontman of the campaign Gary Lineker.

The effort was developed in collaboration with the agencies Talon and Clear Channel.