By Newsroom on May 4, 2016Comments Off on Walkers Strips Gary Lineker to His Undies in Leicester City Tactical Ad 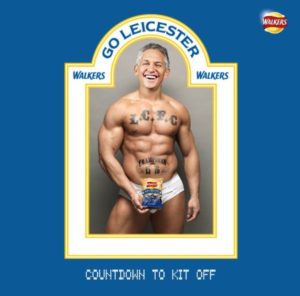 Walkers have seized on Leicester City’s unexpected football victory on May 2 with tactical ads in print and social media.

The crisps brand took out a full-page ad in The Sun in the UK, which featured the face of its long-time brand ambassador, Gary Lineker, superimposed on a muscular frame with “L.C.F.C” tattooed across his chest and wearing nothing but underwear.

Lineker, a former England captain who is a Leicester native and fan of the club, is seen smiling and holding a special bag of Walkers crisps, which is “salt and victory” flavour (instead of salt and vinegar).

Football fans will know Lineker, the presenter of BBC One’s Match of the Day highlights show, said he would strip to his pants on TV if Leicester won the Premier League title.

The ad follows Walkers’ digital billboards in April that showed the pundit’s modesty covered by bags of crisps which disappeared as the team got closer to the title.

Walkers Strips Gary Lineker to His Undies in Leicester City Tactical Ad added by Newsroom on May 4, 2016
View all posts by Newsroom →