Want Positive Dreams? There May Be A Drink For That

By Newsroom on April 3, 2013Comments Off on Want Positive Dreams? There May Be A Drink For That

Did you ever have such a wonderful dream that you hoped it would not end?  This is the very subject being addressed in a new advertising campaign by the California Milk Processor Board (CMPB), the creator of GOT MILK?

The CMPB is showcasing another occasion during the day to stop and have a glass of milk.  The advertiser behind the ubiquitous tagline uses humor in its new ads to encourage consumers to make milk the “bedtime drink” for proper sleep and for positive, lasting dreams.

“Milk has protein rich in tryptophan that can help improve sleep quality,” says Steve James , executive director of the CMPB. “As work and home life become more and more hectic, this new campaign aims to have consumers take a pause and establish a nighttime routine with milk.  It is the real, simple choice for restful sleep.”

According to the National Center for Sleep Disordered Research at the National Institutes of Health (NIH), as much as 40 percent of the U.S. population suffers from insomnia, have difficulty staying and/or falling asleep.  People who lack proper sleep suffer from sleepiness, irritability and lack of attention span throughout the day.

Produced by San Francisco-based advertising partner Goodby, Silverstein and Partners and directed by agency Chairman Jeff Goodby, the CMPB will roll out two, 30-second television spots titled ‘Goddess’ and ‘Flight,’ to humorously reinforce how milk is the real and simple drink at bedtime to help with sleep quality.

‘Goddess’ opens with a dream sequence set in a misty, opulent Grecian swimming pool at night. Suddenly a beautiful woman dressed in a white bathing suit appears and we hear her inner thoughts (in Italian) beckoning the dreamer to follow her into the pool.

In the pool, the woman swims beautifully and gives the dreamer seductive looks with her eyes.  Then just as the woman is about to surface from beneath the water, a tall, bald, man dressed in the woman’s bathing suit surfaces and says:

“What?  Don’t like interrupted dreams?  There might just be a drink for that.”  Then the man walks away and swims into the pool.  The spot cuts to salsa music playing over a shot of a glass of milk sitting in a moonlit kitchen, and ends with the ubiquitous tagline, “GOT MILK?”

The second spot, ‘Flight,’ opens with a man running through a park. Suddenly, the man realizes that he is gradually lifting off the ground and he miraculously finds himself in flight.

He cruises through the clouds, over the landscape below. A woman dressed in 18th century garb picnics in the park, adding to the illusion of the possibilities and incongruities in dreams.

She looks up in awe, while other couples stop to take notice of the grown man flying above them.  The flying man soars through the air, eventually being overtaken by a gaggle of geese in a flying “V” formation, at which point the dreamer hears someone say, “pssst.”

The goose to his right turns and speaks and says: 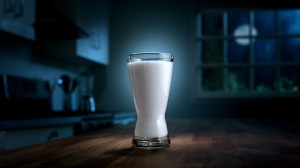 “Hey, this dream could have gone on longer if you’d just had a certain drink before bed, but you didn’t, Sooo….”  We see the man instantly drop out of sight towards the earth, while the goose watches. Then the spot cuts to salsa music playing over a shot of a glass of milk in a moonlit kitchen, and ends with the ubiquitous tagline, “GOT MILK?.”

“Love fantasies and flying are two of the most common dreams people have,” says Goodby. “We wanted to bring these fantasies to life in a funny way to bring the message home: without the proper nighttime routine with milk, consumers may not be able to fully realize their dreams.”

In addition to the television spots, on April 22nd the CMPB will unveil digital bus shelters in San Francisco that would make people yawn, the ultimate sign for the bedtime drink.

At the end of the series of yawn images, a call to action ensues, inviting sleepless folks to call a dedicated “sleep hotline” at 1-855-MILK-ZZZ.

Consumers can choose from a series of options to help them go to bed – from the world’s most boring man reciting the number pi, to hearing a lullaby, to listening to the soothing chants of a meditating monk, among others, all brought to them by “the bedtime drink, GOT MILK?”

After 8 p.m., online banners will appear on sites like Hulu, About.com and YouTube to remind consumers that, “It’s time for the bedtime drink.”

To view the new GOT MILK? spots and to learn more about the nighttime benefits of drinking milk, visit www.gotmilk.com

Want Positive Dreams? There May Be A Drink For That added by Newsroom on April 3, 2013
View all posts by Newsroom →