By Newsroom on July 30, 2013Comments Off on Weird Weather: Ice Cream ‘Snow’ Poured Down In London 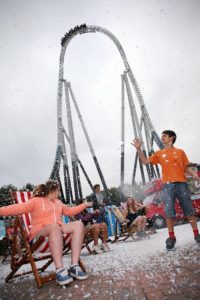 If you thought weird weather that dispensed food only belonged to the fictional world—like in the animated film ‘Cloudy with a Chance of Meatballs’—think again.

London-based avant-garde baker and creative director of ‘Eat Your Heart Out’, that previously created an edible hotel made of cake, Miss Cakehead created “ice cream snow”.

The crazy weather that broke out at Thorpe Park treated visitors to ice creamy “snow” showers that tasted of vanilla and strawberry.

Isolated in the shadow of the 0-80mph Stealth Rollercoaster of the theme park, the artificial snow of vanilla- and strawberry-flavored flurries gently descended from above—of which, visitors could lap up.

The ice cream show was created to celebrate the unpredictable British weather.

Weird Weather: Ice Cream ‘Snow’ Poured Down In London added by Newsroom on July 30, 2013
View all posts by Newsroom →