By Newsroom on January 17, 2014Comments Off on “What America (Tw)eats”: New Analysis Reveals US Breakfast Habits 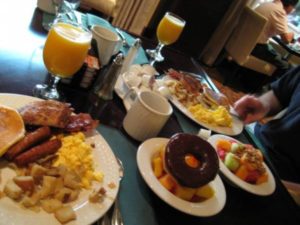 A first-of-its-kind exploration of social data conducted by the National “got milk?” Milk Mustache Campaign in conjunction with social media analytics firm Crimson Hexagon has found that many Americans are skipping breakfast in the morning, and that the foods that they eat and tweet about may be missing the mark when it comes to balanced nutrition.

The new study, titled “What America (Tw)eats”, suggests that, based on their tweets, Americans like to talk about protein  and include some nutrient-rich choices, like milk in their AM conversations, but may be too focused on foods with too much fat, and no fruits or vegetables – if they eat breakfast at all.

“What America (Tw)eats” is based entirely on more than 20 million candid tweets over the past two years that Americans pushed out about what they eat (or don’t) for breakfast each morning.

The digital study puts a spotlight on the way America currently eats, including that many skip breakfast entirely. In fact, there are thousands of tweets every single day about skipping breakfast, and one in five say they skip due to lack of time to prepare or eat a morning meal.

“Skipping breakfast can lead to mid-morning cravings that can really defeat New Year’s resolutions to eat better,” said award-winning registered dietitian and chef for The Arizona Republic’s “Healthy Dish” Michelle Dudash. “But eating a breakfast with protein can help keep you fuller, longer so you’re more likely to see resolution success in 2014. Milk has 8 grams of high-quality protein in each 8 oz glass.” 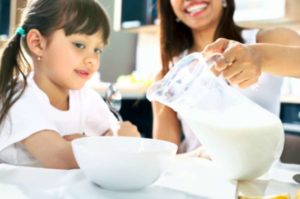 The top breakfast foods most tweeted about are bacon, eggs, pancakes and toast. Even more surprising, there are more than 100,000 tweets about eating cake or chocolate for breakfast, and another 200,000 tweets about pizza. Leftovers, fast food and even pie are also part of the morning discussion – all signs that our breakfasts may be missing the mark. On the breakfast beverage front, coffee, tea and milk are the top-tweeted-about options.

Powering Up With Protein

Despite Americans’ interest in protein – and an estimated 1.3 million protein-packed tweets including top-tweeted protein foods milk, eggs and bacon – Americans are least likely to include this important nutrient at breakfast. Experts recommend including 20-30 grams of protein at each meal rather than in one large amount, but the average adult breakfast only includes 10-12 grams of protein.

“Many Americans don’t know that paying attention to not only the amount of protein consumed, but also when you consume it, can help you stick to your healthy eating resolutions and set you up for success,” Dudash said. “This year, resolve to start your day off right with a breakfast that includes lowfat or fat free milk – 8 grams in each 8-oz. glass of milk – that’s more protein than in an egg!”

Milk is a natural source of high-quality protein to build muscle and protein, and as part of a good breakfast, can help keep you fuller, longer. Plus it has calcium and vitamin D to strengthen bones and B vitamins for energy. It’s a breakfast powerhouse, packed with 9 essential nutrients.

“What America (Tw)eats”: New Analysis Reveals US Breakfast Habits added by Newsroom on January 17, 2014
View all posts by Newsroom →