By Newsroom on February 13, 2017Comments Off on Wild Turkey Master Distiller Celebrates 35th Anniversary with Launch of Master’s Keep Decades 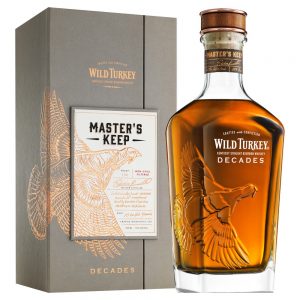 Following in his father’s and grandfather’s footsteps, Wild Turkey Master Distiller Eddie Russell decided to dabble in the family business a few miles from his boyhood home at the Wild Turkey Distillery. That was back in 1981, and the new college grad wasn’t quite sure the distilling business was for him. Flash forward more than three decades and the student has become the master, celebrating his 35th anniversary and releasing some of the finest whiskies the Bluegrass State has to offer.

“For Master’s Keep Decades, I went all out and used some of the rarest and most precious barrels in our stocks,” shared Eddie Russell. “The final product is a whiskey with the finesse and deep character of older Bourbon, anchored by the bold, balanced, and vibrant backbone of younger bourbon. I have to say, this is a whiskey I truly love and I’ll be holding a few bottles back for my personal collection.”

With this release, Wild Turkey looks back on the long road to the release of Master’s Keep Decades, which started on June 5, 1981, when Edward Freeman Russell put his work boots on for the first time at Wild Turkey. Starting the same way his father did, Eddie had to master every menial job in the distillery before being promoted to supervise the rickhouses where the barrels aged. As he got further along in his career, his father, legendary Master Distiller Jimmy Russell, began to pass down the knowledge he had learned from his own mentors, while instilling in Eddie the values of integrity, craftsmanship and never compromising on quality.

In 2015, Eddie earned the illustrious title of Master Distiller and joined his father at the distillery’s helm. Today, the two Bourbon Hall of Famers work side by side as the industry’s only active father and son master distiller duo, boasting almost 100 years of combined experience. With the same sense of humility, humor and passion for perfection as his father, Eddie continues to influence the ever-expanding whiskey industry and bring new products to market, including Wild Turkey Bourbon (formerly known as Wild Turkey Bourbon 81), Wild Turkey Diamond Anniversary, Wild Turkey Master’s Keep and now, Wild Turkey Master’s Keep Decades.

“When Eddie started working at the distillery, I didn’t make it easy for him. I didn’t want people to think I was giving him special treatment, so I made him do a lot of hard, thankless work to earn everyone’s respect,” recalled Master Distiller Jimmy Russell. “Watching him step into his own, earn the admiration of his peers and create some of the best whiskies I’ve ever tasted has been the most fulfilling experience a father could ask for.”

Made from a blend of whiskies aged 10 to 20 years, this 104 proof (52% alc. /vol.) Kentucky Straight Bourbon has a nose of oak and caramel. It delivers beautifully intricate notes of butterscotch, dried fruit, chocolate, and smoke, and lingers with a smooth, sweet, and spicy finish.

Available nationally in the US and at the Wild Turkey Visitor Centre in Lawrenceburg, Kentucky, Wild Turkey Master’s Keep Decades will retail for $150 for a limited time.