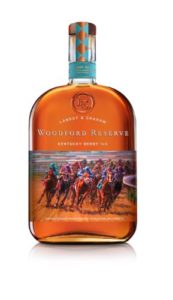 Schuster’s image on the bottle is entitled “The 4th Turn” and captures the horses and jockeys in their multi-colored silks racing down the final stretch and last turn of the Kentucky Derby, one of the most thrilling moments in sports. There is a blur of the stands of fans in the background cheering them on to victory.

The neck band features a diamond pattern of light blue and copper as well as the Kentucky Derby 140 date sealing the top of the commemorative bottle. An attached tag hangs around the bottle bearing information about the product and the artist.

“David O. Schuster has been a fixture of the city’s art community for over a decade, making him the ideal selection as the 140th Kentucky Derby bottle artist,” said Jason Kempf, Woodford Reserve brand director.

“Schuster has a true ability to craft beauty and wonder from his equine subjects, and Woodford Reserve is honored to showcase his work on this year’s commemorative Derby bottle.”

The commemorative liter-size bottle will be available nationwide beginning in March at a suggested retail price of $43.99.

Woodford Reserve has been the “Official Bourbon of the Kentucky Derby” for the past 16 years.  It also sponsors a Grade I race, The Woodford Reserve Turf Classic, which runs on Kentucky Derby Day, May 3, 2014, and has become one of Thoroughbred racing’s premier turf events with a $500,000 purse.