By Newsroom on April 11, 2013Comments Off on World’s First Vodka Made From Cow Milk 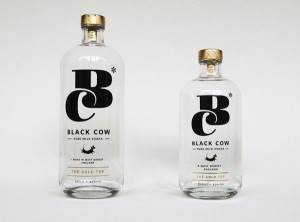 For those who love milk and alcohol—not necessarily together—a UK-based farmer has created a poison that combines the beverages of your choice.

The world’s first fresh whole milk-based vodka—called ‘Black Cow’—is the brainchild of Beaminster, Dorset, England-based Jason Barber, and is said to be an exceptionally smooth drink with a distinct “creamy texture”.

The concoction took Barber three years to perfect—and was conceived after he watched a TV documentary about people in small Siberian, Russian republic, Tuva, who make vodka from using yaks’ milk.

Using the milk of his farm cows, Barber first separates the milk into curds and whey: the curd, he uses to make cheese; the whey, he ferments into beer (using special yeast) to convert the milk sugar into alcohol.

After the beer milk is distilled, it goes through a secret blending process—the resulting milk vodka would then be triple-filtered and hand-bottled.

According to Daily Mail, James Bond star Daniel Craig, and Elizabeth Hurley are big fans of the milk vodka.  Barber also said that Black Cow is the only alcoholic drink that doesn’t give him a hangover.

Black Cow is priced from approximately US$35 per bottle.

World’s First Vodka Made From Cow Milk added by Newsroom on April 11, 2013
View all posts by Newsroom →