By Newsroom on June 6, 2018Comments Off on XXXX Gold Loses Iconic Xs in Newly Launched State of Origin Campaign

To demonstrate its continued and long-running support of the Queensland Maroons, XXXX GOLD is doing away with its iconic red four Xs and replacing them with something sentimental for the Maroons’ passionate fanbase, as part of a new campaign via Host/Havas. 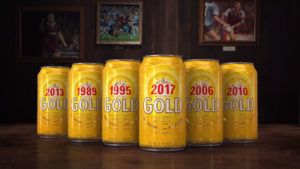 The campaign will see the famous brand logo replaced in-store and on-pack with the years of the XXXX team’s favourite Maroons’ series victories. Special edition cans enable Queenslanders to ‘Taste the Glory’ of the Maroons success with each can telling the story of a series’ most memorable moment, as selected by past Queensland players and the team at XXXX.

Darren Spiller, chief creative officer, Host/Havas said: “It’s not every day that a brand will remove their most recognisable attribute, but nothing shows XXXX is more committed to Queensland than by replacing their iconic logo to honour the on-field achievements of the Mighty Maroons.”

Richard Knight, XXXX marketing manager, XXXX Gold, Lion Australia said: “This year’s State of Origin will once again be a must-watch spectacle for fans across the country. As long-time supporters of the Maroons, we wanted to give fans the ultimate way to cheer on the team and be at the heart of the celebrations. There have been some great moments over the years – we had a tough time selecting them – and hope there will be more to add after this series.” 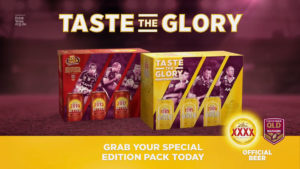 The special edition packs are supported via a TVC, on-premise and in-store activity. There will also be dedicated social content featuring Maroons’ players sharing their most memorable series wins and inviting fans to discuss theirs.

The new campaign follows the success of the brand’s previous State of Origin campaign ‘Locals Make League Legends’, also developed by Host/Havas, which championed local Queensland football clubs as the roots that produced Origin greats we know and love today.