By Newsroom on September 12, 2013Comments Off on You Will Soon Be Able To Make Soup With Your Coffee Machine 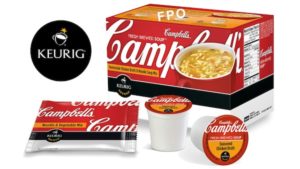 Thanks to a collaboration between instant soup company Campbell’s and coffee machine maker Keurig, we will soon be able to make soup and coffee with the same machine.

Creating a Campbell’s Soup K-cup of broth that works with Keurig’s single serve machines, the special soup pack will also come with a packet of dried noodles and vegetables.

There is no need to be concerned about the soup and coffee mixing as Keurig’s machines are designed to be cleansed during the brewing process, so there is no danger of hybrid flavors.

You Will Soon Be Able To Make Soup With Your Coffee Machine added by Newsroom on September 12, 2013
View all posts by Newsroom →