By Newsroom on August 2, 2013Comments Off on A Smartphone-Controlled Coffee House, From Briggo & Fuseproject 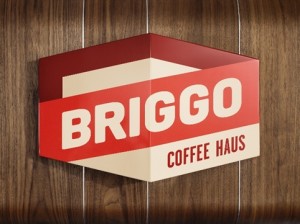 The app or website-controlled system lets customers order a cup of coffee exactly the way they like it and specify the time they want to pick it up, to avoid having to wait in line.

Customers can also save their favourite coffee recipe and receive a text message when the drink is ready.

Behar says, ‘It was important for the design to turn Briggo into a destination rather than a thing. We named it Coffee Haus and designed it to look, smell and feel like a coffee shop.’

The kiosk features embedded touchscreens, which people can also use to order from, with digital status updates providing information on orders. 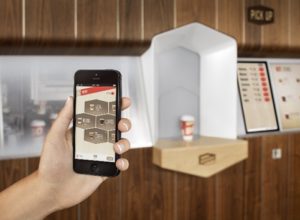 It uses materials including wood veneer, glass and aluminium, and transparent areas reveal some of the coffee-making robotics, with sounds including beans grinding.

Behar says that when the coffee is ready it is ‘ceremoniously’ presented on a ‘magical turntable’.

Briggo says it is aiming to take on established chains such as Starbucks by targeting ‘locations where high-quality coffee offerings have not been previously available’.

The kiosk has been designed to be easy to install in locations such as airports, hospitals, offices and universities.

The company claims it is not aiming to take jobs away from baristas, saying, ‘Our goal is to place the Briggo Coffee Haus in locations where building an entire coffee shop does not make sense.’

The first of the newly-designed Briggo kiosks is being installed in The University of Texas campus in Austin, and is set to roll out to further US venues later this year.

A Smartphone-Controlled Coffee House, From Briggo & Fuseproject added by Newsroom on August 2, 2013
View all posts by Newsroom →