By Newsroom on June 13, 2013Comments Off on Aesop’s Gurning Designs for Bristows Traditional Bonbons

The consultancy worked on new packaging, print collateral and point of sale materials for the brand, which feature a series of ‘gurning’ faces with straplines ‘they suck’ and ‘they’re chewy’.

Martin Grimer, Aesop executive creative director, says, ‘This was all about injecting fun and personality into the brand. Our mouth-focused pack idea inspired us to capture the chewy, ‘sucky’ experience in a campaign using gurning!’ 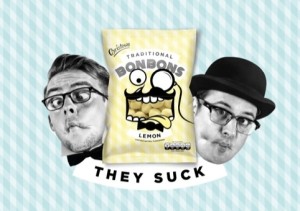 The designs use a pastel colour palette and gingham pattern, with a different colour used to differentiate each of the four flavours in the range.

The product window on the packaging forms the mouth of a character described by Aesop as ‘an eccentric “fruity” toff’, sporting a moustache and monocle.

A matte finish was chosen for the packaging aiming to ‘nod to Bristows retro credentials – reminiscent of the sweet bags of yesteryear’, according to Aesop.

Aesop has also created new packaging for Bristows Chewy Bonbons, due to launch from around July or August this year. These designs aim to appeal to a younger audience through the use of bold, psychedelic colours and ‘zany’ characters.

The Bristows Traditional Bonbons range will go on sale from this month.