By Newsroom on August 3, 2017Comments Off on Argentine Beer Brand Brahma Uses GIFs to Make a Full-Blown Ad

It was only a matter of time before one of the staples of social media and pop culture, GIFs, made their way into the commercial world. 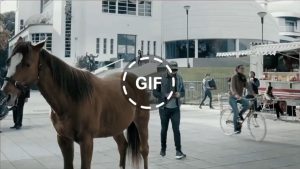 Buenos Aires agency Santo has disguised this new ad for Argentina’s most popular beer, Brahma, as a series of ridiculous GIFs. The aim: to capture the attention of its target market comprising 18 to 24 year olds.

“It’s 6pm GIFing time is over,” says the main character in the spot after he gets repeatedly kicked in the head by a horse. According to him, “There’s a time to GIF and a time to live,” and right now he has friends waiting for him with an ice-cold Brahma.

The film was directed by Armando Bo, the screenwriter of Birdman, and produced by Rebolucion.