By Newsroom on August 7, 2018Comments Off on Australians Encouraged to Pork More Often in New Australian Pork Limited Campaign

Australian Pork Limited (APL) has created a stir with the latest ad in its long-running, cheeky brand campaign, created by APL’s long-serving agency partners Noble Brands Worldwide, but complaints to the Advertising Standards Bureau have already been successfully defended.

Peter Haydon, general manager of marketing, APL said: “We half expect to hear from a few wowsers every time we release a new brand ad. This one was no exception. But they were very quick off the mark this time. This new ad had an outstanding ‘likability’ score in pre-testing, so thankfully the complaints have been dismissed and we get on with helping Aussie pig farmers selling even more pork.”

The new ad is set inside the waiting room at a suburban doctor’s surgery where the focus is on an elderly man waiting patiently as his wife has her scheduled check-up. When his wife reappears, she paraphrases her doctor’s health advice – quite loudly, as he’s a little hard of hearing – and tells him, “The doctor says we should Pork more often.” Later, we hear a voice-over explain what the doctor’s actual advice must have been in that Pork fillets are half the fat of beef fillets and a valuable source of iron. 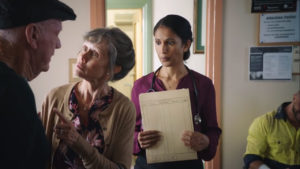 Haydon added: “In recent times, the focus of Pork’s marketing and communication efforts has been on promoting the health and versatility of Pork which has been working extremely well for the brand. This new ad gets us back into some core brand work which has been much loved by consumers throughout the nine years it’s been running.”

The controversy around the new ad has been brought to mainstream attention via Ray Hadley on 2GB and News Limited articles, who have used it as an example of how political correctness could be eating into the creative freedom of the advertising industry.

Monty Noble, ECD, Noble Brands said: “Both News Limited and 2GB had been questioning the recent updates to the Ad Standards Code and defending the creative freedom of our industry – which is wonderful. Ray brought up this latest Pork ad as an example of an ad that may be banned if the code continues to expand down the path it’s currently taking. While I don’t really see that happening (as the Pork campaign is just a bit of tongue-in-cheek fun and wouldn’t be impacted by the new by-laws anyway) it is a shame to think that we are constantly adding to the restrictions around Australian ads – given how easy-going we are as a nation. Perhaps we, as an industry, should be pushing back a bit harder ourselves rather than wait for media outlets to do it for us. Otherwise it’ll become harder to attract the best young talent to the industry and harder still to find clients willing to push boundaries.”

The 30-second ad was directed by Luke Shanahan (who’s first feature film, “Rabbit”, is due for release in August) and produced by Kim Kirby of Walter Ink with post-production by The Editors and sound by Audiobrien.