‘Stay True’ will begin rolling out across key markets from October. The campaign will be spearheaded by a TV spot and will also run across press, outdoor and online media. The activity features a number of ‘Stay True’ protagonists, chosen because they epitomise the brand message.

The TV spot tells the story of a drummer, who performs not for money or fame but for the sheer enjoyment. The star of the ad, Ben Mead, has actually rejected the mainstream music industry and instead favours a less commercial route.

The positioning and the work for the world’s second-biggest selling Scotch brand has been developed by M&C Saatchi London.

Peter Moore, Ballantine’s brand director, said: “Stay True is rooted in the DNA of Ballantine’s, thanks to our founder George Ballantine.

“A true innovator and entrepreneur, he was always original and acted with genuine conviction and flair, and this approach to life is reflected in the unique taste profile and iconic look of the Ballantine’s range. 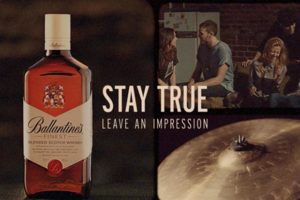 “George Ballantine stayed true and left an impression himself, so we want to continue his legacy by creating a platform that celebrates Ballantine’s and its founder’s intrinsic values.

“We are trying to inspire people to have the conviction to stay true to themselves, to follow their passions and to remain as genuine and authentic as they can be.”

Jeremy Hemmings, global client director at M&C Saatchi London, said: “We’ve gone back to the roots of the brand to establish what we see as a real conviction position that distinguishes it from its close competitors.”

The campaign is currently rolling out across South America (including in Mexico, Chile and Brazil) and southern and central Europe, with other markets globally rolling out throughout 2013 and into 2014.

M&C Saatchi Sport & Entertainment, the brand engagement arm of the M&C Saatchi Group, together with Ballantine’s digital agency, Work Club, will be delivering a global below-the-line campaign via digital and PR.