By Newsroom on October 31, 2018Comments Off on Barbarian Highlights Anheuser-Busch InBev’s Support for Small Breweries in New Campaign

Anheuser-Busch InBev transforms its image from being perceived as an alcohol behemoth that eats up smaller breweries, to a company that small brewers can benefit from, with its new campaign ‘Brewers on Tap’. 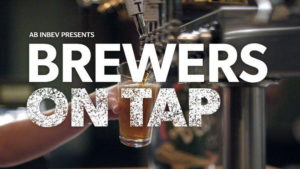 The campaign consists of three films, where beer educator Christina Perozzi chats with the founders of three ABI-owned breweries — Jaron Mitchell of 4 Pines Brewing, Mark Burford of Blue Point Brewery and Jasper Cuppaidge of Camden Town Brewery — about their own passions for beer, innovation, sustainability, and what makes good beer.

The series, devised by Barbarian, will be rolled out on social and ABI’s website throughout Q4. It will show how ABI supports their smaller breweries by giving them a platform for their individual initiatives, and their corporate social responsibility projects such as those involving ocean sustainability, and breast cancer awareness.