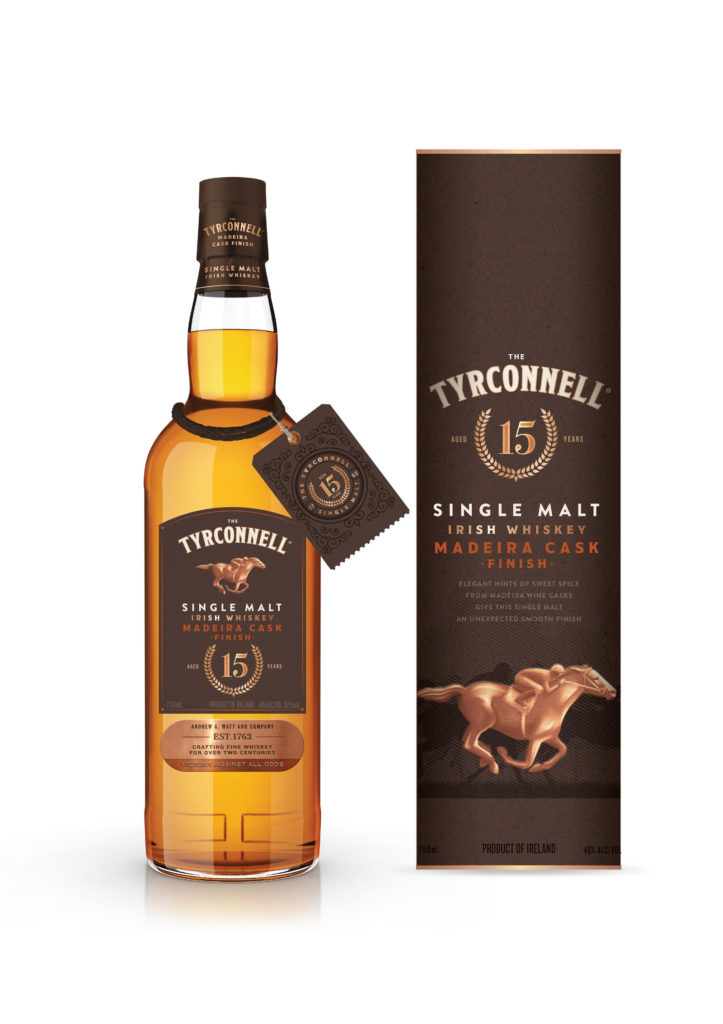 The Tyrconnell is proud to announce the debut of one of the most aged expressions within its cask finish portfolio, The Tyrconnell 15 Year Old Madeira Cask Finish Single Malt Irish Whiskey. Released to select U.S. markets this month with a suggested retail price of $100 (750ml), only a limited quantity has been produced due to its age and unique finish.

Aged for 15 years in American White Oak ex-bourbon barrels and then finished in Madeira wine casks from Portugal’s Madeira Island, The Tyrconnell 15 Year Old Madeira Cask Finish is a one-of-a-kind Irish whiskey with an unsurpassed richness and complexity. It is the oldest Madeira cask finished Tyrconnell released.

“We knew we had discovered something special when we first began experimenting with finishing The Tyrconnell in Madeira casks,” says John Cashman, Global Brand Ambassador. “Because we are in the fortunate position of being one of the oldest Irish whiskey-producing companies, we have the patience to wait 15 long years to present something truly remarkable. The 15 year old Tyrconnell finished in Madeira casks is a beautifully rich and spicy spirit, one that I like to enjoy neat or over a few cubes.”

The Tyrconnell is made of just two ingredients – the finest Irish barley and pure Irish spring water. These two simple materials are transformed by experienced hands into an Irish whiskey like no other. Produced in traditional pot stills, The Tyrconnell is one of a rare few Irish whiskeys that utilises double distillation, allowing more of the rich and natural flavours of The Tyrconnell to remain. This creates a whiskey that carries a delicate flavour atop a creamier, more viscous presence.

Ageing the whiskey for 15 years before incorporating the Madeira cask finishing method into this unique limited edition has resulted in an even more complex expression with an incredible evergreen forest freshness. The best way to enjoy this sipping whiskey is on the rocks or neat to showcase the rich, sweet aromas on the nose, its fresh flavour and spicy finish.

The legend of The Tyrconnell was born in 1876, when R. M. Delamere entered his beautiful chestnut colt, Tyrconnell, in the 10th running of the prestigious National Produce Stakes Horse Race at The Curragh, considered Ireland’s most important thoroughbred racecourse. A short thoroughbred with the odds stacked against him, fortune found favour that afternoon as Tyrconnell crossed the finish line in first place, besting horses and oddsmakers alike on his march to victory.

The against-all-odds victory captured the imagination of the assembled crowd, which included the Watts, an Irish race horse loving family who had built a thriving whiskey distillery. They chose to commemorate Tyrconnell’s win by creating a limited edition, small batch whiskey that bore the name of their local champion. Although the Watts family intended to make The Tyrconnell just once, it ended up becoming their most popular whiskey, even claimed to have been the best-selling Irish whiskey in America before Prohibition.