Ben & Jerry’s Urges Londoners to ‘Give a Fudge’ & Vote 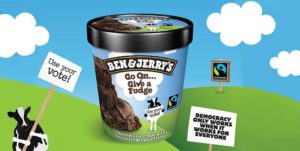 Ben & Jerry’s is yet again proving ice cream can carry political weight with a new sampling-led campaign aimed to get Londoners to the polls.

The US-based brand has teamed up with civil rights campaign group Hope Not Hate to get capital-dwellers voting in the upcoming London Mayoral Election.

Ben & Jerry’s will change the name on selective pots of its Chocolate Fudge Brownie flavour to Give a Fudge as part of a new initiative dubbed ‘Don’t Get Frozen Out’. The campaign aims to reach out to those not registered to vote by hosting a sampling tour across the city in April.

Free scoops of Give A Fudge will be dished out in the boroughs most affected by voter registration changes implemented last December, which meant an estimated 329,000 Londoners dropped off the electoral register. The tour will land in the likes of Hackney, Brixton and South Tottenham. 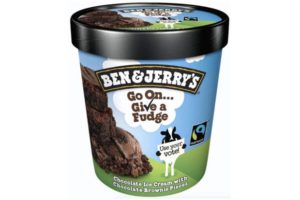 The brand has also added a link to the UK government’s ‘Register to vote’ site on its newly-launched ‘Don’t Get Frozen Out’ page.

Ed Shepherd, social mission manager at Ben & Jerry’s, said: “At Ben & Jerry’s we believe that democracy only works when it works for everyone. We need a democracy where all voices are heard, and we can all have a fair and equal say over the decisions that affect our capital. That’s why we’re teaming up with Hope Not Hate to launch the ‘Don’t Get Frozen Out’ campaign, calling on all Londoners to register to vote and make sure their voice is counted in the May polls.”

Ben & Jerry’s has backed a number of other social and environmental causes, including the US presidential election, gay marriage and climate change.