By Newsroom on May 10, 2016Comments Off on BMB Launches £1.5m ‘Bare Bear Snack’ Campaign for Pom-Bear

BMB agency has launched a fun UK campaign for Pom-Bear that lets parents know the bear-shaped snacks are free from gluten, artificial flavouring or colours – and clothes. 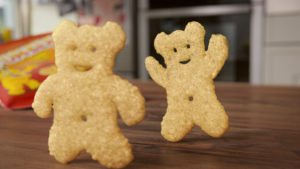 The £1.5m campaign positions Pom-Bear as the ultimate innocent snack for kids free from nasty ingredients, and adds humour to the message by bringing the bears to life using a blend of stop-motion and CGI filming and comedic voiceovers.

In the ads the bears discover the ‘free from’ quality of their ingredients while also realising the naked truth about themselves, under the brand message “The bare bear snack.” 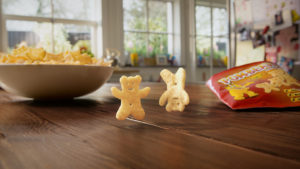 At first the bears react with embarrassment at being caught with no clothes on, before acting with delighted abandon at their naked selves. One bear featuring in a Youtube Pre-roll ad for the campaign does not adjust to being naked however, and encourages the viewer to skip to the end of the video, but is instead joined by a Skip (also manufactured by KP Snacks).

The campaign features voiceovers from sketch comedians Seb Cardinal and Dustin Demri-Burns and runs across TV, VOD and social platforms. 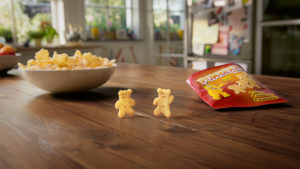 Vijay Bhardwaj, Head of Marketing & Formats at KP Snacks, said: “We are really excited to give Pom-Bear the spotlight it deserves to drive brand awareness and inform mums of its permissible qualities, in a fun and engaging way that’s unique to Pom-Bear.”

Matt Waller, ECD, BMB, said: “We are very proud to give Pom-Bear a voice, so that they can growl, charm and streak their way to the top of people’s minds. We believe they have the potential to be a one-inch tall giant of the snack world.”

BMB Launches £1.5m ‘Bare Bear Snack’ Campaign for Pom-Bear added by Newsroom on May 10, 2016
View all posts by Newsroom →