By Newsroom on November 1, 2013Comments Off on Bombay Sapphire Introduces The Imagination Machine 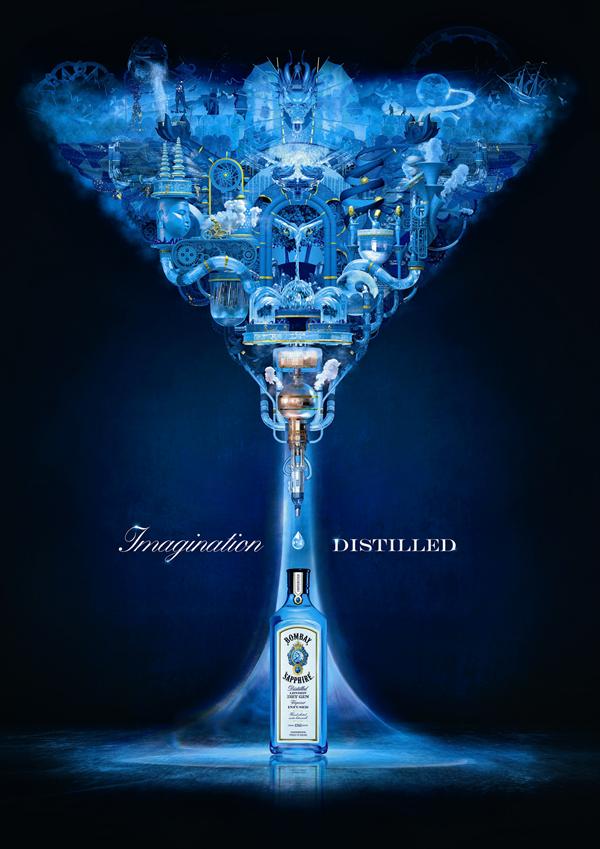 Gravity Road, the Cannes Lions award-winning creative company working with Bombay Sapphire, the world’s number one premium gin, has launched a new global advertising campaign for the brand – Imagination Distilled. Gravity Road brought Nexus Productions on board for the UK launch, to realise Gravity Road’s creative concept of the ‘Imagination Machine’ across print, an animated film and outdoor.

Imagination Distilled was created by Gravity Road, who devised the global strategy, concept and creative. The global campaign launches in the UK and will run in multiple territories, include the US and Spain, using local agencies. In the UK, the work has launched with a takeover of the iconic London Underground stations Oxford Circus and Bond Street, with a digital outdoor campaign.

The ‘Imagination Machine’ uses the process for making Bombay Sapphire as an analogy for the sublime power of creativity. The campaign’s visuals are born out of Bombay Sapphire’s rich product and brand story.  It uses imagery and narratives from the brands history, countries from which botanicals are sourced though to the unique process of distillation. The artwork features the ‘Imagination Machine’, in the form of a blue cocktail glass – reflecting the brand’s aesthetics.

The glass frames specific stories from the 1761 recipe created by pioneering English distiller Thomas Dakin, the exotic botanical worlds of Indonesia, Java and Morocco, through to the drink’s pioneering vapour infusion distillation process. All of these elements are distilled down through the glass to deliver one precious drop into the Bombay Sapphire bottle at the bottom.

Gravity Road’s idea of the ‘Imagination Machine’ was realised by Nexus Productions through the creation of a narrative of interconnected sequences. The starting point was the creation of a stand-alone print image with multiple layers that could then expand and develop into movement. Once the tapestry of storylines had been created, models were worked up to establish the look, and then it was finished in digital 3D for the outdoor LCDs – ending an 18-week project which involved 18 people on the Nexus studio.

The online film can be viewed here.

Mark Boyd, Founder and Creative Director, Gravity Road, says: “Imagination Distilled tells brand and product stories through the metaphor of a perfect Bombay Sapphire gin martini.  The work is imaginative in thought and deed.  Outdoor appears static, but demands another look as the work pulses with life and fires the imagination.  This Imagination Distilled metaphor distills the exotic world of Bombay Sapphire brand and product, and bottles it.”

Nextdoor commented: The biggest design challenge we encountered was striking a balance between an obvious representation of the botanicals and the cultural iconography that surrounds their origin, as we wanted to fuel the viewers imagination and not dictate it. So, a very high volume of concept art was created to solidify this balance.”

“It was Gravity Road’s brief that the intricate designs should be then transformed into a 3D living sculpture, with depth and realism whilst maintaining its present ethereal quality. The brief was to design the machine with real world materials such as glass, marble and stone. Lighting all of these different elements was our main challenge as we had to highlight the path whilst telling the story of the distilling process and guiding our eyes to the essential sections of the glass.

The campaign also builds on Bombay Sapphire’s global activities revolving around the theme of ‘imagination’, which inspired Gravity Road’s Imagination Series for the brand – a global short film platform created by Gravity Road, run in partnership with Tribeca Film Festival.

Bombay Sapphire Introduces The Imagination Machine added by Newsroom on November 1, 2013
View all posts by Newsroom →