By Newsroom on August 4, 2017Comments Off on BrewDog Stunt Sees it Build Craft Beer Bar on the US-Mexico Border 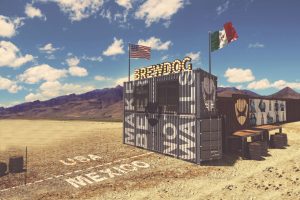 BrewDog loves a good publicity stunt, and in its latest one the Scottish brewer has announced plans to open a new craft beer bar that ‘straddles’ the border between the US and Mexico.

The remote location of the new bar, dubbed ‘The Bar on the Edge’, reflects the brewery’s intention to expand to the ‘farthest reaches’ of the United States, while its controversial positioning makes “a physical statement about collaboration and inclusivity, which have always been a cornerstone of the craft brewer’s identity,” according to a release.

With specific locations still under wraps BrewDog has only revealed that half will be in Texas and the other half in Chihuahua, Mexico. The geographical border will be represented by a dotted line across the center of the bar and along the venue’s outdoor seating area. Built from used shipping containers, the construction would officially be defined as a temporary mobile building and will serve Mexican beers on the US side, and US beers on the Mexico side, as well as BrewDog’s range of craft beers, brewed in Columbus, Ohio.

The announcement will be celebrated with a Tex-Mex craft beer event at the brewery’s DogTap taproom in Columbus on August 5-6. 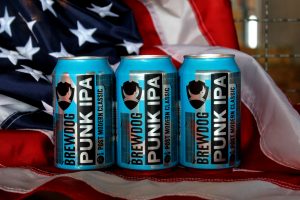 Although the border-straddling bar will be nowhere near any regular footfall, the founders hope it will become a magnetic pole for craft beer fans on both sides of the border to come together.

“’The Bar on the Edge’ will be set up in the furthest outskirts of the United States, reflecting our ambition to reach every corner of the country as we begin to brew our beers on US soil,” said James Watt, co-founder at BrewDog. “Beer has always been a unifying factor between cultures – and our business was born from collaboration and an inclusive approach – so we thought it would be fun to place the bar a few feet further to actually cross the US-Mexico border too. We will request official permission from the local authorities to put it there and adhere to any red tape stuff, but I guess it would make it more difficult to build a wall if there’s a BrewDog bar in the way. We’re planning on putting the bar there anyway until someone tells us to move it.”

BrewDog Stunt Sees it Build Craft Beer Bar on the US-Mexico Border added by Newsroom on August 4, 2017
View all posts by Newsroom →