By Newsroom on October 15, 2015Comments Off on Brooklyn Bowl London Launches ‘Knock Down Punk’ Beer Brand 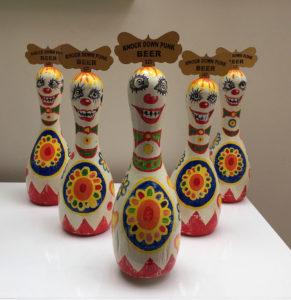 Legendary O2 London venue The Brooklyn Bowl has teamed up with award winning Northamptonshire-based Nene Valley Brewery to create their own line of beer.

In line with the venue’s unprecedented combination of top-flight music, beer and bowling, The Brooklyn Bowl has named the new beer ‘Knock Down Punk’ The beer will be available exclusively in London’s Brooklyn Bowl from 23rd October, just in time for the sell-out show by legendary US bluegrass and rock band Hayseed Dixie.

Like the Brooklyn Bowl London venue itself, the drink mixes UK and US cultures. Nene Valley is an award-winning young brewery and have developed to some of the most exciting new beers on the market.

The refreshing and easy drinking pale lager is a light, easy drinking kegged product brewed to precise recipe. Naturally, the tap will be a Bowling Pin with a carnival punk doll design.

Brooklyn Bowl, Director of Ops Moz Lotter said: “We’re very excited to celebrate the launch of Brooklyn Bowl London’s first house beer. The combination of great British beer, brewed with American Hops is a match made in heaven. We wanted to enter the craft beer market by bringing the party with a brew serious enough in colour and hoppy flavour to engage the craft connoisseur, but light enough in ABV and on the pocket to keep the party going for a full-on session. We’re all about fun and flavour here at the Bowl and don’t feel the two have to be mutually exclusive. As lovers of live music and good beer, we wanted Knock Down Punk to reflect the needs of the gig-goer.”

Moz continued: “We wanted to develop a house beer that wasn’t just a cheap and cheerful re-branding of a generic, mass-produced line but rather something custom-made that matched our unique independent status. We already serve a diverse range of craft beers but wanted to develop something really unique and in keeping with our personality. Nene Valley Brewery exceeded our expectations with ‘Knock Down Punk’.”

Dick Simpson, co-owner of Nene Valley Brewery, added, “Right from the our first meeting we recognised that the two businesses shared a set of values that centered around an absolute commitment to quality and providing the best possible experience for our clients regardless of cost. For us this rationale extends to our own restaurant, the Tap and Kitchen, here at Oundle Wharf where we too prepare everything from scratch from carefully sourced ingredients. It’s the same with our beers, and Knock Down Punk is no exception, using the best malted Maris Otter barley and a carefully-chosen blend of American Hops to produce a beer we are sure Brooklyn Bowl will be pleased to offer as their house pour.”

“The Brooklyn Bowl team took a central role in developing the beer – testing and tasting and sampling until venue and brewery had something both were happy with. Together we’ve come up with crisp, pale ale with enough body to satisfy but at 4.4 ABV light enough to remain refreshing. We’ve used an array of hops designed to give great flavor, complexity and balance,” added Dick.

Launched in London in 2013 as a food and live music venue featuring 12 bowling lanes, Brooklyn Bowl has played host to diverse range of acts including Lauryn Hill. Pharrell Williams. We Are Scientists. The Dandy Warhols and Dinosaur Jr. Referred to “One of the most incredible places on earth…” by Rolling Stone, the unique and exciting venue in London serves food from New York’s highly acclaimed Blue Ribbon chefs alongside a huge selection of local and international craft beers and a diverse drinks and cocktail list.

Nene Valley Brewery has been in operation at Oundle Wharf near Peterborough since 2012 and has steadily built up a growing reputation for producing a range of beers that has garnered awards and critical acclaim. The associated Tap and Kitchen restaurant was opened at the end of 2014 and is a finalist in the Restaurant of the Year category in the Northamptonshire Food and Drink and Drink Awards.

‘Knock Down Punk ‘ will be available on tap from 23rd October exclusively at Brooklyn Bowl London.