By Newsroom on June 14, 2013Comments Off on Budweiser Kicks Off Man of the Match Program For FIFA Confederations Cup 2013 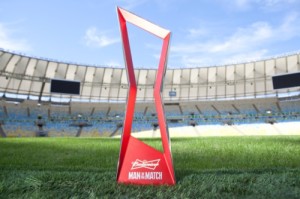 Presented during every match of the FIFA Confederations Cup Brazil 2013 and the upcoming 2014 FIFA World Cup Brazil, the Man of the Match award recognizes the top player from each game who had the most significant impact or influence on their team’s performance.

The FIFA Man of the Match, presented by Budweiser, enables football fans around the globe to choose which player will receive the award during each FIFA Confederations Cup 2013 match.

To build upon the millions of fans who voted during the 2010 FIFA World Cup, this year Budweiser is making it easier for fans to make their voice heard by introducing three new ways to vote.

In addition to visiting BudweiserManoftheMatch.com and FIFA.com, fans can now cast their vote through iOS and Android mobile apps, on select Budweiser Facebook pages and via Twitter @FIFAcom.

Voting begins at the start of the second half and closes at the end of each match.

“We are proud to give fans the opportunity to decide which player receives the Man of the Match award, and we wanted to make participation more accessible than ever before. By introducing new voting platforms, we hope that more football fans across the globe will have a chance to get closer to the game they love.”

“In every match, there are players who produce defining moments that contribute to the outcome of the game,” said Thierry Weil, FIFA’s Marketing Director

“The FIFA Man of the Match, presented by Budweiser, honors those game-changing players.  In 2010, we gave fans all over the world the chance to have their say by voting for the best player in every FIFA World Cup match. Together with Budweiser we’re looking forward to offering fans this opportunity once more for the FIFA Confederations Cup and next year for the FIFA World Cup.”

Budweiser Kicks Off Man of the Match Program For FIFA Confederations Cup 2013 added by Newsroom on June 14, 2013
View all posts by Newsroom →