By Newsroom on March 29, 2016Comments Off on Carling Launches ‘Bank Holiday In The Bag’ Promotion 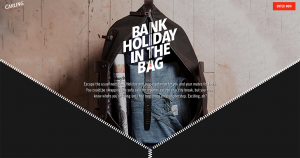 Carling is launching a major new promotion, ‘Bank Holiday In The Bag’, which will offer lucky individuals the chance to win a free holiday with three of their mates over the May Day bank holiday weekend. Lucky winners will be notified by the delivery of a bag which will contain goodies to enjoy on their trip, in addition to instructions revealing where they’ll be heading on their exciting getaway.

The promotion forms part of Carling’s ongoing activity to create lasting relationships with consumers, adding value to the moments that matter to consumers and in turn driving loyalty to the benefit of customers.

The campaign is open now and will encourage consumers in the UK to make the most of their extended weekend, by entering the promotion – until 22nd April. Consumers can register here for the chance to win the ultimate bank holiday for themselves and three mates. Winners will be drawn at random, and the twist is, they won’t find out if and where they’re going until the bag is delivered.

Lucky winners are in with a chance to win a holiday at a number of destinations worldwide, from paradise beach breaks to glamorous city getaways. Winners will be revealed throughout April as bags are delivered to groups of individuals across the UK. The bags will contain a range of goodies to enjoy on their ultimate bank holiday break, including event tickets, selfie sticks to capture every moment, destination related items and much more.

The campaign follows Carling’s successful ‘Brighton or Barbados’ promotion last year which sold out in minutes. Consumers were given the opportunity to spend their May Day bank holiday in either Brighton or Barbados, on a first come, first served basis. Tickets could be purchased for just £49 per person but lucky winners didn’t know where they were going until after they’d booked.

Jim Shearer, Carling Brand Director at Molson Coors, says: “Following the phenomenal success of our ‘Brighton or Barbados’ campaign last year, we wanted to encourage consumers to make the most of their bank holiday in a memorable way for a second year running.”

“Whether it’s a city break or an exotic getaway, this promotion is about ensuring people can avoid the gardening or DIY to make the most of their bank holiday and spend the extra time off doing something unforgettable with their mates.”

“Carling is committed to driving value back into the lager category beyond price, and our ‘Bank Holiday In The Bag’ promotion is testament to this. Our new campaign aims to bring excitement back to the ‘familiar favourite’ category by focusing on adding value through promotions at the moments that matter most to consumers.”

Carling Launches ‘Bank Holiday In The Bag’ Promotion added by Newsroom on March 29, 2016
View all posts by Newsroom →