By Newsroom on April 3, 2013Comments Off on Carlsberg Named Official Beer for Chinese Super League

IMG Worldwide, the global sports, fashion and media company announced today that it has entered into a new partnership agreement with Carlsberg China.

Effective immediately, Carlsberg is the exclusive beer partner of the Chinese Super League (CSL), China’s top-flight football league for the next three years (2014-2016). Financial terms of the transaction were not disclosed.

The signing comes a week after IMG brought famed footballer David Beckham to China as the first global Ambassador of Chinese Football.

Carlsberg will promote the CSL and EPL — two of the most watched sports leagues in China — jointly in its marketing efforts. 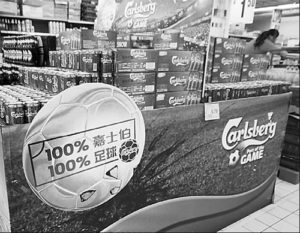 “As the most commercial and most watched sports league in China, CSL is the crown jewel of Chinese sports. As a leading brewer in the world, Carlsberg has a long history sponsoring sporting events, especially football. This new partnership will leverage the two partners’ experience and resources and improve the quality of the league, bringing the fans higher quality football and entertainment.”

Mr. Zhu Qilin, General Manager of CSL Co., said, “The CSL needs the support of its commercial partners to take the league to a new level. This new partnership will see Carlsberg bring to the CSL its rich experience in working with other football leagues and help build the league and increase its quality and influence.”

“We are very excited that, as part of this deal, Carlsberg will promote the CSL throughout China in conjunction with the EPL,” said Adam Zhu, Vice Chairman of IMG Asia Pacific and Chairman and President of IMG Greater China. “This new sponsorship agreement will help us build the brand and cache of the CSL. We have pledged that as the strategic partner of the CSL, IMG will spare no effort in promoting the CSL and Chinese Football. Our dedication to CSL and Chinese Football are more than a business partnership, we are happy to invest IMG’s resources in full range,” Zhu said.

Last year the CSL returned to CCTV 5 and witnessed a 90% growth in total viewership. In Season 2013, CCTV 5 will drastically increase the number of CSL games it will show.

With its 40 years of experience in football sponsorship, Carlsberg is committed to supporting the CSL and bringing fans better match-day experiences.