By Newsroom on March 23, 2016Comments Off on Carlsberg Pours Further Support Behind Liverpool Football Club 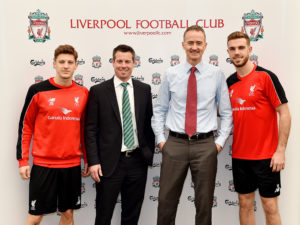 Carlsberg has agreed a three year extension to their long standing partnership with Liverpool Football Club. The deal secures Carlsberg’s role as the club’s Official Beer until the end of the 2018/19 season and deepens the relationship with one of the most legendary football clubs in the world.

The 2016/17 season will mark a 25 year association between Carlsberg and Liverpool Football Club which was the leading beer brand’s first move into English football. Since the first deal was signed in 1992, Carlsberg has continued to invest in the sport, focusing its efforts on finding new ways to improve fans’ experiences each year by keeping them at the heart of activities. During the last 25 years, an estimated 6,5 million Carlsberg pints have been served at Liverpool’s home-ground, Anfield.

With the new sponsorship, Carlsberg will have improved pouring rights at Anfield with perimeter signage rights, access to players and improved ticket and hospitality opportunities which will help to increase the value of the sponsorship.

Mikkel Pilemand, Vice President Core Beer, Carlsberg Group: “Carlsberg and Liverpool Football Club are both iconic brands and have enjoyed a very long and loyal partnership. This latest extension to our partnership is testament to the strong link between us, and further deepens the longest partnership in Premier League history. 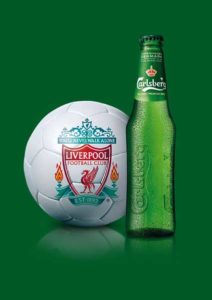 “The sponsorship agreement is a good example of our re-focused strategy to invest in consumer facing and efficient sponsorships. Football continues to be a key beer occasion. And football will remain a key pillar of the Carlsberg brand, both short and longer term. We already have some very promising activation ideas for 2017. At the same time, we will continue to invest in other unique elements beyond football that differentiate our brand from others, including our great beer quality and unique heritage which we will bring further to life in the second half of 2016.

“We’re very proud of our ongoing association with Liverpool Football Club, one of the most renowned clubs worldwide with excellent global reach and strong ambitions. As well as seeing how far they go in the Europa League this season, we’re very much looking forward to the opening of Anfield’s new Main Stand where we will be able to host even more customers and deliver the best ever fan experiences… probably.”

Commenting on the extension, Billy Hogan, Chief Commercial Officer at Liverpool Football Club said: “We are extremely pleased to extend our partnership with Carlsberg, who we have enjoyed working with for 25 years now. Throughout that time, the relationship between the two brands has been mutually successful. Carlsberg has become part of the fabric of the club and everyone associated with Liverpool FC appreciates this unique and longstanding relationship. We greatly look forward to working with them for the next three years and thank them for their loyalty during the last 25 years.”