By Newsroom on March 7, 2016Comments Off on Carlsberg Subverts ‘Your Mum’ Humour for Mother’s Day

The humble ‘your mum’ insult, an essential item in the ‘banter’ armoury of British men for years, has been given the If Carlsberg Did treatment with the brand’s latest piece of video content – If Carlsberg Did #YourMum.

The video, released ahead of Mother’s Day on March 6th, saw comedians Lloyd Griffith and Tom Davis butt heads to exchange ‘your mum’ quips with a difference – each of the gags celebrate their mums and the role they’ve played in their lives. 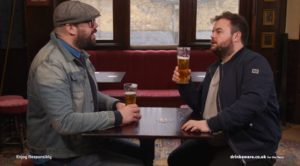 Dharmesh Rana, Senior Brand Manager at Carlsberg UK, said: “Anyone can make a stupid gag at the expenses of their friends, but we wanted to create a piece of content which adds a layer of wit and intelligence to it. Clearly, ‘your mum’ is normally associated with negative sentiment and we’ve tried to turn it on its head, to ensure we’re celebrating mums across the country this Mother’s Day, by creating a piece of content which consumers genuinely enjoy and talk about in a positive way.”

The film acts as the launch for a social campaign promoted by the brand in the run-up to Mother’s Day, with consumers able to submit their own positive #yourmum jokes through Twitter, with the best ones being recreated and shared by Carlsberg’s creative team.

Carlsberg Subverts ‘Your Mum’ Humour for Mother’s Day added by Newsroom on March 7, 2016
View all posts by Newsroom →