By Newsroom on May 6, 2016Comments Off on Charity Collectors Give Fans a Helping Hand to UEFA Euro 2016

Carlsberg has this week rewarded charitable people who pledged 90 minutes for their nation, with tickets to watch England matches as part of its UEFA Euro 2016 campaign, If Carlsberg Did Substitutions.

Putting its own twist on the stereotypical charity fundraiser, Carlsberg unleashed a team of ‘super fundraisers’ outside a busy London train station – to substitute the ordinary for the extraordinary.

The squad attempted to lure the public away from their busy days and anyone generous enough to stop and agree to give up 90 minutes for their nation was instantly rewarded with a pair of tickets to watch England at UEFA Euro 2016. 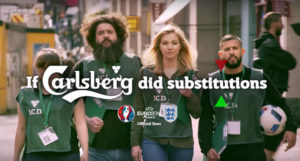 Senior brand manager, Dharmesh Rana commented: “As the Official Beer of UEFA Euro 2016 we want to build excitement ahead of the tournament this summer. As the domestic season comes to an end our aim is to get the nation to substitute their clubs for their country, and to be able to reward football fans with the chance to go to France and support the England team is something we’re really proud to do.”

The activity follows on from Carlsberg’s collaboration with football funnyman Chris Kamara who went undercover on the tube kitted out in full prosthetics disguised as an old man. Kammy substituted anyone who gave up their seat on the tube for seats at the Euros. You can view the full ‘Your Seat for Euro Seat’ stunt here.

Keep an eye on Carlsberg’s Twitter account, @CarlsbergUK, to see how the brand will be aiming to substitute ordinary experiences for the extraordinary for fans across the nation.

Charity Collectors Give Fans a Helping Hand to UEFA Euro 2016 added by Newsroom on May 6, 2016
View all posts by Newsroom →