By Newsroom on July 31, 2014Comments Off on Chipotle Continues to Innovate with Twitter & Facebook Mystery URL Promo 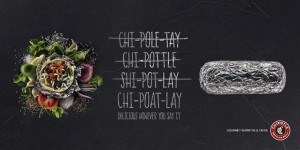 Mexican food chain Chipotle UK has promised to give away 14,000 burritos over the course of seven days in August, in a promotion driven by Facebook and Twitter.

The restaurant chain has become renowned for its innovative approach to marketing, having gained global recognition at this year’s Cannes Lions for a short film highlighting the dangers of processed food.

For its latest marketing push, Chipotle has created a series of 24-hour websites that will go live every day for a week from 5 August, and accessed via Chipotle’s Facebook, Instagram and Twitter accounts.

However, consumers wanting to grab a free burrito will have to be quick witted – the URLs for each of the sites will appear fleetingly, with individual words appearing very briefly.

The first 2,000 consumers to visit the site each day will be able to download a voucher that can be redeemed one of Chipotle’s six London branches. Each voucher will be valid for a fortnight.

Chipotle has been widely lauded its marketing efforts, winning two Grand Prix and eight golds at this June’s Cannes Lions festival. The accolades were thanks to the Mexican food chain’s short film ‘The Scarecrow’.

The film was launched in 2013. It depicted a scarecrow’s journey through a dystopian world where all food production was controlled by a sinister industrial giant called Crow Foods. Its aim was to educate people about the extent to which their food is processed.

Chipotle Continues to Innovate with Twitter & Facebook Mystery URL Promo added by Newsroom on July 31, 2014
View all posts by Newsroom →