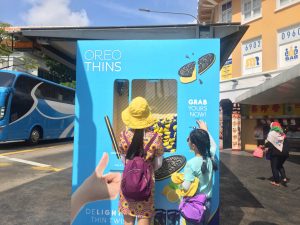 Modelled on an actual arcade claw machine, Oreo brings the fun back with the new Oreo Thins Lemon on Clear Channel Singapore.

It has been an exciting year for Oreo Thins after the tremendous success from their launch in August 2016. In 2017, Oreo placed a greater challenge to Carat and Clear Channel Singapore to launch their newest flavour Oreo Thins Lemon – to set a new record with an innovative creative.

“Oreo wanted to create a unique, face-to-face brand experience instead of just sending a message to its audience. So we created a concept that intertwined an old school funfair arcade game with a traditional medium – and turned it into a new idea. This campaign is a great showcase on how we reinvent with creativity and how we utilise the power of Clear Channel’s scale to attract, engage and connect!,” said Amanda Woo, Head of Commercial, Clear Channel Singapore. 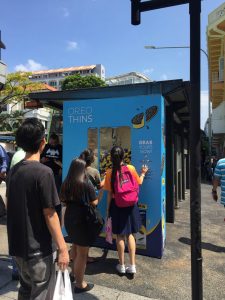 “We are thrilled to partner up with Clear Channel this year to create a first-in-market creative outdoor activation. It aims to generate buzz for the new flavour launch for Oreo Thins, while making it a fun and engaging way for our consumers to enjoy Oreo Thins product. This is coupled with a strong 360 support including amplification on various social medias, islandwide bus adverts, TVC on YouTube as well as a nationwide in-store promotion. We hope to inspire our consumers with new moments of joy with Oreo Thins,” quipped Jovena Loon, Assistant Brand Manager, Oreo, Mondelez Singapore.