By Newsroom on March 6, 2014Comments Off on Coca-Cola Ads Seem to Reference How There Used to Be Cocaine in its Soda 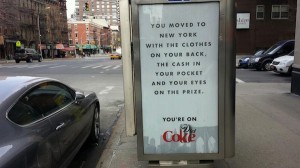 Did you know that when Coca-Cola first launched in the 1800s, it contained cocaine? This ingredient was only removed in 1903 due to growing hostile sentiment about the drug.

This controversial heritage was naturally downplayed when Coca-Cola gave itself a wholesome image—however, a new ad campaign that appears to embrace this aspect of the company’s history has been spotted on the streets of New York City.

The tagline that reads “You’re On. Diet Coke” looks more like “You’re on Coke” at first glance, which has a very different kind of message.

Created by ad agency Droga5, the ads have caused quite a stir online—Coca Cola has since released a statement, saying that the campaign aims to “celebrate ambitious young achievers” and that “Diet Coke in no way endorses or supports the use of any illegal substance”.

Lifestyle website Animal New York was inspired by these ads and has come up with a more realistic ad series about what it is really like to be “on coke” in New York City—you can view them below.

Coca-Cola Ads Seem to Reference How There Used to Be Cocaine in its Soda added by Newsroom on March 6, 2014
View all posts by Newsroom →