By Newsroom on February 8, 2016Comments Off on Coca-Cola Assembles Marvel’s The Hulk & Ant Man in Super Bowl Ad

Coca-Cola assembled two Marvel superheroes for its Super Bowl ad on February 7 in a bid to push its new Coke Mini cans.

The 60-second ad featured the latest Marvel character to receive the film treatment in Ant-Man, voiced by Paul Rudd, facing off against Hulk in a cross city chase. 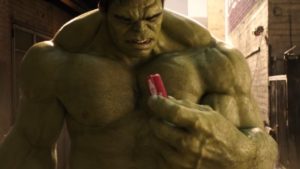 The ad revolves around Coke’s new mini cans which are part of its new strategy to address criticisms of the levels of sugar in its drinks. The campaign runs under the tagline “Feel the Difference” and uses the hashtag #CokeMini.

In the ad, Ant-Man infiltrates Bruce Banner’s lab and takes a can of Coke mini from the fridge while casually saying: “Hey Bruce, you don’t mind if I just take this last Coke, do you? Thanks, bye!”

Hulk then chases Ant-Man across a busy city in pursuit of the drink.

The partnership with the Marvel Cinematic Universe is a smart move of Coke given the popularity of the characters and the play on size between them which fits in with the new sized cans.