By Newsroom on March 17, 2014Comments Off on Coca-Cola Creates a Specially-Designed Glass to Make its Soda Taste Better 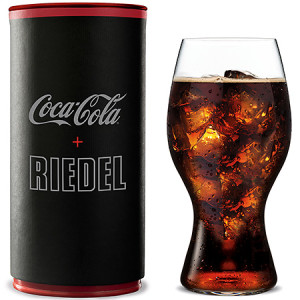 Coca-Cola has partnered with Austrian wine glassmaker Riedel to create a glass that is meant to make its soda taste better.

30 employees from Coca-Cola’s public relations and marketing departments, a panel of taste testers from the soft drink company, as well as wine and beer taste experts were involved in a sensory workshop held in Atlanta last April. 18 different Riedel prototype glasses were created, and the finished product claims to “capture the distinct spices, aroma, and taste of Coca-Cola”, according to its description on Riedel’s website.

Riegel CEO Georg Riedel said in an interview with Fast Company, “This glass starts with the introduction of the aromas, beautiful lemon, citrus, lime character, malt characteristics, the mouth feel, the effervescence. The glass orchestrates the sweetness on the palate.”

The ‘Coca-Cola + Riedel’ glass is available as a single glass or a set of two, and can be purchased at Bed, Bath & Beyond and at the Coca-Cola store.

Coca-Cola Creates a Specially-Designed Glass to Make its Soda Taste Better added by Newsroom on March 17, 2014
View all posts by Newsroom →