By Newsroom on September 29, 2014Comments Off on Coca-Cola Gets Its Groove On with New Ubisoft Partnership

Coca-Cola is unveiling the next step in its global partnership with Ubisoft with the launch of unique content available via the new mobile game Just Dance Now. The content will be available for free via QR codes on 250ml cans of ‘Coca-Cola’, ‘Diet Coke’ and ‘Coke Zero’. The mobile game will be downloadable for free from September 25th from the iTunes store and Google Play (limited and ad-supported version). 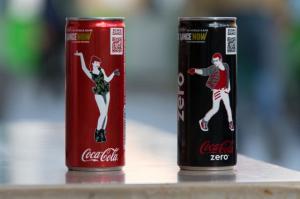 In addition to the launch of the mobile version of Just Dance, the brand is also partnering with Misfit to bring Misfit Flash Fitness and Sleep Monitor, a versatile and easy-to-use fitness and sleep monitor, to even more people.

These innovative partnerships and technology platforms support the brand in inspiring people to be more active through everyday lifestyle activities, such as dancing or walking. The aim of the initiatives is to inspire teens to move more, more often and builds on the work Coca-Cola is already doing to support people in living active, healthy lives.

To mark the release of Just Dance Now mobile and Misfit Flash Fitness and Sleep Monitor, a one off launch event was filmed in Paris to unveil the technology and get people to take part in a public dance off. 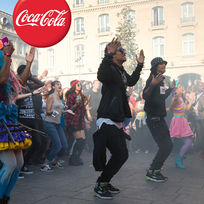 The event took place in the heart of Paris at Place St Lazare on September 15th and gave people the opportunity to experience for the first time the new mobile version of Just Dance and dance to the new Coca-Cola song “Find Your Move”.

Members of the public were joined by exclusive Coca-Cola guests, the internationally acclaimed French dance duo, Les Twins in partnership with DanceOn Network. Renowned for their innovative style of hip hop dancing, the two brothers – also known by their monikers Larry “Ca Blaze” and Laurent “Lil Beast” – gave the audience an exclusive show, sharing with them the moves that make them happy.

The event was filmed and directed by former Hip Hop dancer, Mehdi Idir, aka Minos and demonstrates the positive impact that movement and dance have. 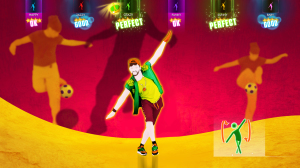 Following the release in April 2014 of its official football Anthem “The World is Ours” on Just Dance, the second phase of the Coca-Cola and Ubisoft partnership is the launch of the new mobile game Just Dance Now. Coca-Cola is proud to support one of the major Ubisoft innovations in recent years which is taking the famous dance game out of the living room and making it mobile so it can be played anytime, everywhere, with an unlimited number of friends, by simply connecting to any internet-connected-screen.

The mobile game will be downloadable for free from September 25th from the iTunes store and Google Play (limited and ad-supported version). To coincide with the launch more than 25 million limited edition Just Dance cans of ‘Coca-Cola’, ‘diet Coke’ and ‘Coke Zero’ will be released across Europe from October 1st, featuring a QR code which enables people to download the mobile game for free. More than fifty tracks will be available at launch, including the greatest hits from previous Just Dance games with new ones to be added each week. The exclusive Coca-Cola track “Find your Move” will be available for free to all Just Dance fans around the world! 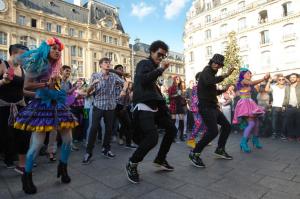 To help to inspire teens to move and encourage active lifestyles, Coca-Cola has also partnered with Misfit around the development and the creation of Misfit Flash Fitness and Sleep Monitor – a wearable, versatile and easy-to-use fitness and sleep monitor.

Flash will allow people to automatically measure their steps, calories, distance, sleep quality and duration, and will even track cycling and swimming. Available in seven unique colors, it will never require charging and can be worn virtually anywhere – on a user’s wrist, pants, shirt, shoes, lapel or event on a keychain.

Coca-Cola Gets Its Groove On with New Ubisoft Partnership added by Newsroom on September 29, 2014
View all posts by Newsroom →