By Newsroom on September 23, 2013Comments Off on Coca-Cola Inspires More than 3 Million People to “Get The Ball Rolling”

This summer, millions of people were inspired to move and groove with Coca-Cola as part of its Get The Ball Rolling initiative. Coca-Cola has reached its goal to inspire 3 million Americans to rediscover the joy of being active in communities across the country since May.

“For Coca-Cola, inspiring moments of happiness is part of our heritage and our future. What’s more fun than families and friends delighting in the joy of being active?” said Stuart Kronauge, General Manager, Sparkling Beverages, Coca-Cola USA. “While we teamed up with communities across the country this summer to get people moving more, we’re far from done. We plan to continue using our unequaled reach to inspire healthy and happy living.”

The Company, with The Coca-Cola Foundation, inspired more than 3 million people to get their “fun” on. It helped make activities and sports gear available in communities across the country all summer long.

Asbury Park’s Live Positively Fitness Center is equipped with strength training machines, cardiovascular gear and interactive exercise games customized for middle school students. It’s one of 100 such facilities that will open at schools around the country over five years. 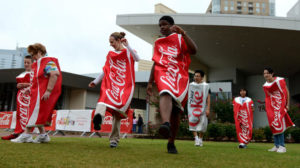 The fitness centers are expected to facilitate 5 million workouts. Center locations are focused on areas with high childhood obesity rates and areas that have few places for children to access state-of-the-art equipment. Participating schools are selected by the National Foundation for Governors’ Fitness Councils and the American College of Sports Medicine. Funding is provided through a grant from The Coca-Cola Company.

“The health of our children is vital to the health of our future and that’s why I’ve declared war on childhood obesity,” said Steinfeld to a crowd of students and community leaders. “We are providing schools with tools to improve fitness, benefit academics and combat obesity. We can overcome any challenge when we work together to inspire and motivate students. The partners who joined forces today bring this idea to life.”

The Asbury Park Live Positively Fitness Center is one of 12 locations opening in 10 days across Delaware, Georgia, New Jersey and West Virginia. The centers are part of Get the Ball Rolling activities that helped inspire more than 3 million Americans to move this summer. Other activities included:

Initiatives like Live Positively Fitness Centers and Get The Ball Rolling are part of The Coca-Cola Company’s commitment to bring people together to help address obesity. These efforts focused on engaging communities, families, experts and governments. In addition, the Company is delivering more beverage choices, calorie information and making physical activity opportunities more available than ever before.

Coca-Cola Inspires More than 3 Million People to “Get The Ball Rolling” added by Newsroom on September 23, 2013
View all posts by Newsroom →