By Newsroom on September 25, 2018Comments Off on Coca-Cola Launch New ‘Australian Moments’ Campaign by McCann Sydney

Coca-Cola has launched a campaign via McCann Sydney, commemorating 80 years of great tasting beverages made by Australians in Australia. 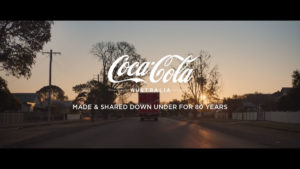 The integrated marketing campaign will have multiple touchpoints with consumers led by a new locally-produced TVC running across screens and also supported in PR, social media and out-of-home. The TVC will be aired during the AFL Grand Final on Saturday after 3pm.

The tagline featured in the end frame of the TVC is “Coca-Cola Australia: Made and shared down under for 80 years.”

Lucie Austin, marketing director, Coca-Cola South Pacific said: “Eighty years is a significant milestone and a timely occasion to celebrate Coca-Cola’s lasting and strong connection to Australian culture and people. Many Australians assume that Coca-Cola drinks are shipped all the way from the US to our shores. We want to break this myth by sharing the stories of everyday Australians connected through Coca- Cola, who have made, bottled, and enjoyed the world’s greatest drink right in their backyard, for 80 years.” 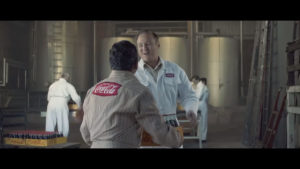 The creative takes a nostalgic look at Coca-Cola in Australia throughout the decades, opening in 1938 when local production first began, then cutting to a classic corner store in the 1960s, a music festival in the 70’s, a beach kiosk in the 1980’s, before closing on the corner store as it appears now, in the present day.

The spots feature a range of brands from Coca-Cola’s past and present portfolio including Fanta, Mello Yello, Mount Franklin, Coke Classic and Coca-Cola No Sugar, as well as authentic and historically accurate props sourced from passionate brand collectors around the country.

Bringing the campaign to life with a high-impact out-of-home execution, the famous ‘Coke Sign’ in Sydney’s Kings Cross will be used as the site for a brand first in Coca-Cola’s 132-year global history. The famous ‘Spencerian Script’ red-and-white logo has been flipped upside down in a nod to the company’s local heritage down under.

Austin added: “By telling an emotive brand story full of relatable moments throughout Australia’s history, we aim to trigger the positive memories that people associate with Coke and our other iconic brands. It’s a look back on our heritage and role in the lives of all Australians from hot summer days at the beach, to dancing up a sweat at music festivals, all relatable moments that are inextricably linked to enjoying a great-tasting Coca-Cola.” 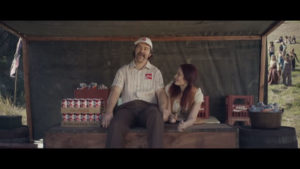 The campaign delivers the Australian Made message, integrating the brand into the heart of Australian programming throughout October, launching during the AFL Grand Final, the largest live sporting event in Australia and continuing with spots in the NRL Grand Final. The campaign’s media buy also support locally produced content on Foxtel throughout the month, including classic Australian films such as Muriel’s wedding.

Social and PR will focus on delivering real Coca-Cola stories from some of the people who have been part of this 80-year journey and who love the brand. From the bottlers and delivery drivers, to the corner storeowners, collectors and staff, the campaign will tell just some of the stories of the thousands of Australians that have helped shape eight decades of Coca-Cola made and shared down under.

The Aussie Made campaign will also build awareness of the range of beverages Coca-Cola produces in Australia and give audiences an insight to the next 80 years for Coca-Cola in Australia.

Austin concluded: “The first Australian made 192ml (6 1⁄2 oz) bottle of Coke rolled off the lines in Waterloo, NSW in 1938. Today, Coca-Cola Australia is more than just Coke. We are Mount Franklin, Powerade, Barista Brothers, Pump and more than 160 other products – all of which are made, bottle and distributed from 11 facilities around Australia.”