By Newsroom on September 13, 2017Comments Off on Coca-Cola Launches World’s First Vending Machine which Accepts Dialect as Payment

During this summer the Coca-Cola bottles’ labels promoted over 90 different holiday destinations. To activate this locally, Coca-Cola in Sweden chose to highlight some of the Swedish destinations on the labels.

Sweden is renowned for its many different local dialects, with clear phonetic and grammatical characteristics that can be irreconcilable, even for Swedes. And so, the world’s first vending machine where you pay with dialect was born. 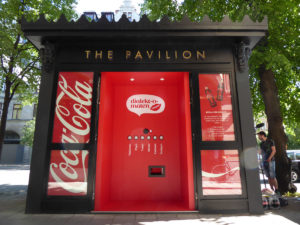 In order to make Dialekt-o-maten happen, an open source code from the Dejavu project, together with a unique code for the machine, was implemented to read user’s voices. The software read the intonation in the language, which is the most distinguishing feature of different dialects, and takes into account voice, tempo and tone mode to determine how close you are to the original dialect.

In addition to the software, other components such as buttons, lamps, a Raspberry Pi and a lot of wires were also used.

The vending machine devised by Isobar, was installed at Stureplan in central Stockholm. Thirsty fans along with journalists were invited to try it. Depending on how well they could pronounce the different phrases – they were rewarded an ice cold Coke.