By Newsroom on June 3, 2015Comments Off on Coca-Cola & McCann Launch Third Sequel to Summer ‘Share-A-Coke’ Campaign

With the release of Coca-Cola’s 2015 ‘Share-A-Coke’ Summer communication, slated to roll out across China at the beginning of June, the integrated campaign is designed to add an element of excitement and spark in the lead-up to one of the most anticipated seasons of the year – Summer.

Over the previous two seasons the ‘Share-A-Coke’ platform tapped into popular culture with Nicknames and Music Quotes, which have been hugely successful, deepening the brands connection with the Chinese youth in delightful surprising ways.

This summer, the Coke bottle labels will exhibit lines from some of the China’s most loved movie blockbusters, complementing the films and continuing the theme of surprise and drama.

Richard Cotton, content and creative excellence director of Coca-Cola China said: “Our third release in the highly acclaimed ‘Share-a-Coke’ franchise is going to be even bigger and better. Brace yourselves for this Summer’s mega blockbuster!”

Cia Hatzi, regional business director, McCann Worldgroup for Coca-Cola added: “Through movie drama the creative opportunity for this Summer’s ‘Share-A-Coke’ blockbuster has allowed the communications to become overtly playful. By ‘borrowing’ dramatic scenes from blockbuster type movies, we’re able to bring the consumer in to the point of tension in the film.The exhilaration of the drama heightens the crave, thirst for the refreshing taste of Coca-Cola.” 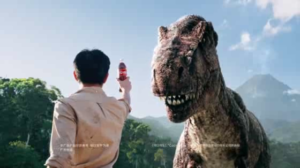 “All credit to our agency partners, McCann, Isobar and Starcom,” continued Cotton.

The integrated communication will consist of loads of content and surprises including two TVCs, movie trailer type teasers and online videos, along with print, point-of-sale, retail and an online Youku partnership with China’s online social media platform.

Launching early June with a dynamic dinosaur chase for that irresistible taste of Coca-Cola, the campaign will run nationally until August 2015 with the objective to strengthen Coca-Cola’s relationship with the youth in China by adding a bit of drama to their summer.

In 2013, Coca-Cola’s Summer ‘Share-A-Coke’ campaign published Nicknames on the labels and in 2014 the Coke labels became the canvas for sharing favourite music lyrics.