By Newsroom on December 27, 2013Comments Off on Coca-Cola Serves-up ‘Reasons to Believe’ Brand Campaign

Coca-Cola is launching a multi-channel brand campaign dubbed “Reasons to Believe”, a push designed to remind consumers there is more good than bad in the world.

The new ad campaign centres around a 60-second TV spot, soundtracked by a child choir version of Candi Staton’s 1986 single “You Got the Love”.

It shows negative vignettes – such as a criminal running from the police and imagery of youths kicking a car in what appears to be a riot – offset by positive scenes, including people running a charity race and a same sex wedding ceremony. The scenes depicted were based on a piece of qualitative research into the issues that matter to UK consumers, Coca-Cola says.

Coca-Cola’s Reasons to Believe campaign will also include a 90-second video designed for social media, outdoor, digital and in-store activity. The social media activation in particular will invite consumers to contribute their own “reasons to believe” on Coca-Cola’s digital brand platform Coke Zone. 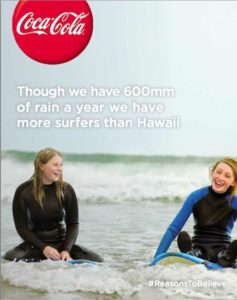 It is hoped the campaign, localised versions of which have already run in 70 countries globally, will “affirm” Coca-Cola’s status as a brand that promotes “optimism and happiness”.

She adds: “This campaign takes us back to the heartland of what our brand has always stood for – talking to people on an emotional level about topics that are relevant to them and spreading happiness and optimism.

“Coca-Cola as a brand has never been afraid to speak its mind and has an authentic cultural depth across the world – everyone in some way has a nostalgic connection with the brand, evoking happy memories.”

Later in January two additional pieces of content will be released to amplify the Reasons to Believe campaign. The creative for the campaign was developed by Ogilvy and Mater, while Mediacom handled media planning and buying.

Last month, Coca-Cola’s recently promoted senior vice president of integrated marketing communication and design for North America Jonathan Mildenhall told Marketing Week the brand was seeking to make messages related to its equality and diversity values “more pointed”. This effort appears to be highlighted by the inclusion of the same sex wedding ceremony in the Reasons to Believe TV spot.

It is a shift that comes as the company faces increasing pressure from gay rights campaigners over its sponsorship of the 2014 Sochi Winter Olympics in Russia, which earlier this year introduced a law which prohibits the promotion of “non-traditional” relationships to minors.