By Newsroom on February 3, 2016Comments Off on Count Grecula a Great Success Say The Co-operative 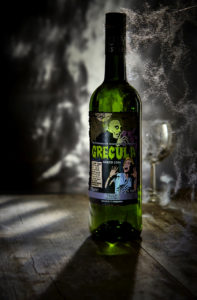 The Co-operative’s reputation for creative design that sells on-shelf continues to grow with its latest challenge to convention; a wine label design that wouldn’t look out of place on the shelves of a comic book store.

Equator Design’s creative team is the inspiration behind The Co-operative’s Truly Irresistible Grecula Wine. The 2014 Greco features a unique label representing the witchcraft and magic which are synonymous with the region of Benevento, where the wine is produced. Once known as the “city of witches”, Benevento is a province in the heart of southern Italy where the volcanic soils give this medium-bodied wine a big flavour with aromas of honey, lemon and spring meadows. 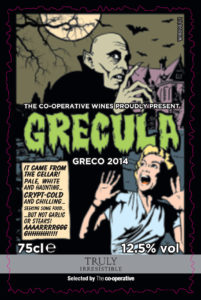 Ben Cahill, Wine Buyer at the Co-operative, says: “Equator threw themselves into this with relish. Right from the start they understood that this was no ordinary brief and that they could really have some fun creating the mighty Count Grecula. To say they exceeded our expectations is an understatement; we were delighted with the results – as were our customers. This was our most enjoyable collaboration yet; a real scream from start to finish…fangs a lot Equator!”

Howard Wright, Equator Design’s creative director in its Manchester headquarters, says: “The brief we received from The Co-operative was every creative agency’s dream. The wine buyer wanted to create a label which resembled the story of the wine and was different to others on the shelf – and which added a fun dimension to the bottle.

“That really got our creative juices flowing. We came up with a number of different creative treatments and it was a battle between our two favourites synonyms for Greco – Morbidella and Grecula – with the latter winning out and, as they say, the rest is history.

“Drawing inspiration for the label’s character from Transylvania’s best known son, the idea behind the Grecula concept is that everyone is dead scared of Greco, when in fact he is a lovely bloke who likes collecting special deco grapes! The illustrative style is reminiscent of DC Comics superheroes. The project features high on the list of our favourite all-time creations and it has been amazing to see the reaction in-store, in the press and on social media.”

The wine launched in 2015 and its ghoulish appeal was a big hit with Halloween revellers. Its continued popularity is splashed across social media with #grecula appearing regularly in posts.

Count Grecula a Great Success Say The Co-operative added by Newsroom on February 3, 2016
View all posts by Newsroom →