By Newsroom on November 5, 2018Comments Off on Dallas Cowboys Star Defensive End DeMarcus “Tank” Lawrence Teams with SNICKERS to “Sack” for the Troops 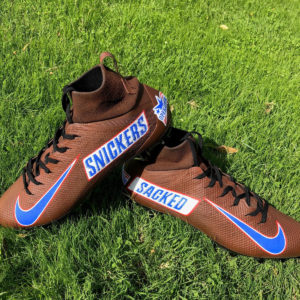 As one of football’s leading sack specialists, Dallas Cowboys start defensive end, DeMarcus “Tank” Lawrence, has a knack for getting to opposing quarterbacks. SNICKERS and Operation Gratitude are planning to tap into his unique talent, as well as his love of chocolate bars packed with peanuts, caramel and nougat, to help score a taste of home for Troops serving overseas this holiday season.

In the spirit of friendly competition – the Mars-owned brand challenged Lawrence to score a sack during the Cowboys game on November 5. Should he prevail, Lawrence will trigger the donation of 20,000 “SNICKERS Sacks” that will be included in Operation Gratitude’s annual holiday Care Packages delivered to Service Members deployed around the world.

“Mars has a long-standing relationship with the military, as well as Operation Gratitude, and we’re grateful to have the opportunity to showcase our appreciation to those who serve our nation,” said Josh Olken, Brand Director, SNICKERS Brand. “Since 2003, Operation Gratitude has delivered more than 2.1 million of their signature Care Packages, so hopefully DeMarcus can help rack up even more tonight.” 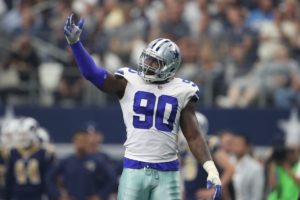 Assuming Lawrence will reach the quarterback tonight, SNICKERS and Lawrence will join more than 100 volunteers at Ford Center at The Star, the Dallas Cowboys World Headquarters in Frisco, Texas, to sack the SNICKERS on Wednesday, November 7. Volunteers will include Mars Associates from the Waco, Texas, site where SNICKERS are manufactured. In addition to sacking bags of products, volunteers will also pen letters of appreciation to the Troops to be included in Operation Gratitude’s Care Packages.

“We’re thrilled to partner with SNICKERS and DeMarcus to deliver a sweet taste of home in the 20,000 Care Packages we send to deployed Service Members this holiday season,” said retired Marine Lieutenant Colonel Kevin Schmiegel, CEO, Operation Gratitude. “With the passion and commitment of more than a half million Operation Gratitude volunteers nationwide, we are bridging the civilian-service divide and strengthening communities in tangible ways, making meaningful connections between those who serve and the citizens they protect.”

Dallas Cowboys Star Defensive End DeMarcus “Tank” Lawrence Teams with SNICKERS to “Sack” for the Troops added by Newsroom on November 5, 2018
View all posts by Newsroom →