By on July 19, 2016Comments Off on Deliveroo Now Delivers Alcohol Straight To Your Front Door 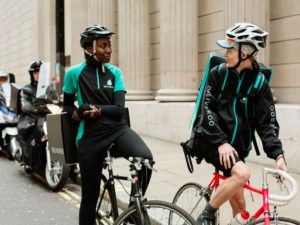 Deliveroo is embracing something that has been on its radar since day one: alcohol.

Deliveroo has partnered with the likes of Majestic Wines and BrewDog to bring beverages right to your front door in less than 20 minutes, according to multiple reports.

The food delivery startup has always had alcohol on its mind, and it was nearly called “Boozefood” when it was founded, CEO and cofounder Will Shu revealed at a talk in London last month.

The basic premise of Boozefood was to deliver food to people late in the evening when they got home after a few drinks but Deliveroo’s latest idea is simply to deliver alcohol to people’s homes and offices.

Deliveroo customers can order craft beer from 20 BrewDog locations across the country but those that are more inclined to a glass of wine may be disappointed to hear that Deliveroo is only delivering from eight Majestic Wines stores in London. They include: St John’s Wood, Guildford, Covent Garden, Battersea, Hove, Islington, Mayfair and Holland Park. Reports suggest you may even be able to order cocktails via Deliveroo. 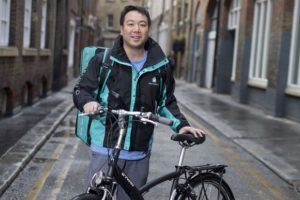 The startup, which has raised over $200 million (£151 million) from investors, has also partnered with a number of smaller independent sellers in London including Lea and Sandeman in Barnes, Honest Brew, Mother Kellys in Bethnal Green and Vagabond Wines in Soho, according to City A.M..

The launch of the new service reportedly comes after a trial that took place in spring.

Founded in London by former investment banker Will Shu and CTO Greg Orlowski in 2013, Deliveroo has built an established business by allowing people to order food to their homes from restaurants that wouldn’t usually deliver, such as Dishoom, Ping Pong, Dirty Burger, and even Michelin-starred Trishna.

But Deliveroo is facing increasing competition in the UK from Uber, which launched its food delivery business in London last month, and a range of other companies. Amazon has also been tipped to enter the UK’s restaurant food delivery market.

Deliveroo Now Delivers Alcohol Straight To Your Front Door added by on July 19, 2016
View all posts by →