By Newsroom on May 3, 2016Comments Off on Diageo Celebrate Leicester City Win with ‘Only One Captain Morgan’ Push 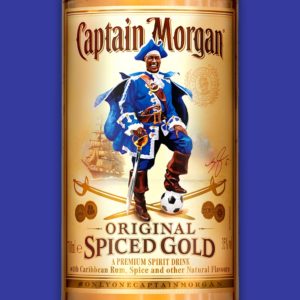 Leicester City fans will be able to toast their captain Wes Morgan with a limited edition Captain Morgan bottle, featuring the star player, following Leicester winning the Barclays Premier League title on May 2.

The spirit brand will release a limited bottle designed to celebrate the Premier League winner’s victory – replacing their famous buccaneer on the label with an image of the footballer.

The special edition commemorative bottle features the Jamaican international star dressed as Captain Morgan in royal blue and white robes to match Leicester City’s home kit. As well as the footballers signature and an updated medallion with 2016 inscribed to mark his title victory as team captain. Supported by several congratulatory ads in the sports pages of the national press.

The brand created the bottles with creative agency RPM in homage to the victorious captain following a Twitter exchange between Captain Morgan and the player after Leicester City’s crunch title match against Manchester United at Old Trafford on May 1.

Wes Morgan: Awesome! I’m assuming my bottle is in the post? @CaptainMorganEU

Captain Morgan: Let me see what my crew can do… @Wes5L1nk #OnlyOneCaptainMorgan

Captain Morgan: Yeah, it’s almost like it was meant to be…like the whole thing was planned 😉 #spons #ad #FullyDeserved @Wes5L1nk 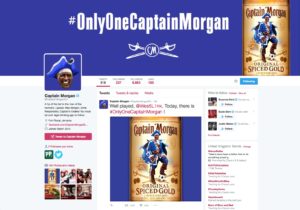 Fans of the premiership football player voiced their love for their Captain, who has played every single minute of the campaign so far, with praise across social media using the hashtag #OnlyOneCaptainMorgan, which also features on the bottle.

Rhys Love, Senior Brand Manager, Captain Morgan said: “Captains lead by example and we are thrilled to have (Wes Morgan) one of the greatest captains of recent times, who coincidentally shares our name, become the centre of a historic sporting moment. We have created a one-off commemorative Captain ‘Wes’ Morgan bottle to celebrate his incredible title win triumph as the club’s skipper. We salute Leicester City and their own Captain Morgan.”

Diageo Celebrate Leicester City Win with ‘Only One Captain Morgan’ Push added by Newsroom on May 3, 2016
View all posts by Newsroom →