By Newsroom on October 10, 2014Comments Off on Dominos Introduce ‘Dom’ The ‘Siri’ Of Pizza Ordering

Siri has found a match in a pizza delivery app with similar voice recognition and intuitive response technologies.

The new app from Domino’s pizza just speaks volumes of how far people will go to make pizza as easy to get as possible.

Pizza has always been put on a pedestal. It comes in an astounding variety. It compliments dorm rooms or dinner tables well. In one bite the pizza is bread, meat, dairy and sometimes even vegetable. All the flavour gently placed on top of a doughy heartwarming crust.

That is probably why Dom just wants you to get pizza because what’s not to love?

Dom is a virtual voice ordering assistant from Domino’s for the chain. While Siri can send text messages for you, Dom will suggest pizza. If you ask Dom to help you find the way, he’ll just suggest getting pizza. Dom’s charming personality and professionalism when talking about his favorite food is one of the first things people will notice. In essence, he just thinks getting pizza is always a good idea.

Patrick Doyle, Domino’s Pizza President and CEO is proud of the revamped Dom: “Mobile customers are not only going to love the ease of this landmark ordering experience, but they now have the opportunity to have some fun with Dom himself, who has a few more things to say than before.”

Dom was released last June but it was only last night that the app will star in national ad campaigns in the US from the chain’s longtime agency, Crispin Porter + Bogusky. Dom has improved ever since and according to the press release, Dom is proud of the updates. “I’m many updates wiser that when I first started,” Dom shares. The virtual assistant will not only let you order pizza, it will also help you find coupons and deals to get the most out of your buck.

Dom was created with voice solutions provided by Nuance Communications. The innovation, which aims to target users nationwide in the U.S., is the first of its kind and scale.

For what Dom can do to help you get pizza, he humbly redirects gratitude to proper parenting: “My motherboard and fatherboard raised me right.” 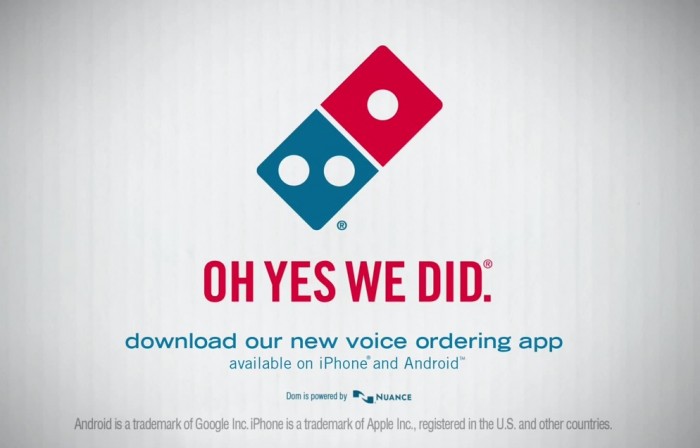 Dominos Introduce ‘Dom’ The ‘Siri’ Of Pizza Ordering added by Newsroom on October 10, 2014
View all posts by Newsroom →