Domino’s Launches on Snapchat with ‘Dough to Door’ Film

By Newsroom on January 22, 2016Comments Off on Domino’s Launches on Snapchat with ‘Dough to Door’ Film 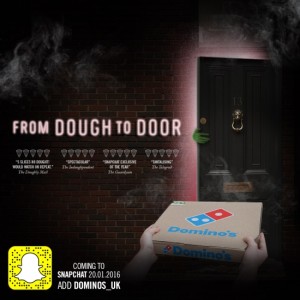 Domino’s has bolstered its social-media presence by rolling out on messaging service Snapchat.

The pizza-delivery brand will promote its tie-up for 24 hours as a Snapchat Story, with the platform carrying a short video ad created by agency Iris.

The “dough to door” film charts the journey of a pizza-delivery driver who encounters an alien invasion. He succeeds in delivering the pizza to its destination, but the door of the house is opened to reveal it is inhabited by alien beings.

Activity will play on Domino’s ‘Greatness’ marketing platform, with viewers of the film shown a sequence of random letters that comprise a discount code that can be redeemed against an online order.

The campaign is being supported by promotion codes appearing across Domino’s other social-media channels, including Facebook and Twitter.

In 2015 it became the first brand to use Tinder as part of a Valentine’s Day push.

Domino’s Launches on Snapchat with ‘Dough to Door’ Film added by Newsroom on January 22, 2016
View all posts by Newsroom →