By Newsroom on March 15, 2018Comments Off on Dos Equis Debuts ‘Keep it Interesante’ Campaign Engineered to be Just a Little Funnier Each Time it Airs

Filmed on all seven continents and the actual moon in stunning 8K resolution, Dos Equis’ new marketing campaign is sure to turn a few heads this spring. And justifiably so. 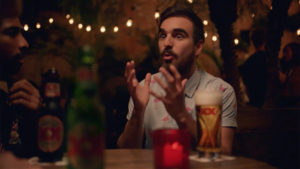 The campaign has been nearly five decades in the making, at a staggering cost of nearly $200 million. The campaign, which encourages folks to embellish their stories to keep friends entertained and engaged during nights out, is the evolution of Dos Equis’ “Most Interesting Man” campaign.

“Throughout the decades-long production of this campaign, we have gone to real extremes to reinforce what it means to Keep it Interesante,” said Quinn Kilbury, Senior Brand Director at Dos Equis. “For the Battle of Cinco De Mayo scene, our director constructed a fully functioning town that housed nearly 4,000 people, each of which were descendants of Moctezuma himself. Most of them don’t appear on-screen, but he wanted to be faithful to every little detail.”

The Keep It Interesante campaign is groundbreaking in the fields of physics and astronomy. During the course of production, a production assistant discovered a new scientific formula that convincingly replaces Newton’s rules of gravity. 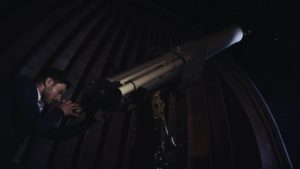 Additionally, a six-pack of Dos Equis was placed somewhere within the Moon’s Sea of Tranquility region for the sake of realism. Two lucky fans will win a trip to split it in an upcoming Keep It Interesante sweepstakes. And the space scene? That was filmed with real astronauts — Louisa and Pete. They’re still up there somewhere.

The campaign doubles as a fully immersive, headset-free VR experience. What’s more, the campaign will utilize proprietary technology so every spot is a little different and a bit funnier every time it airs, ensuring the campaign stays as fresh as the Mexican lager itself.

A two-hour long, star-studded cut of the campaign’s launch spot exists, but focus groups rated the ad so highly, it’s being held back for the moment and will be released as a feature film next fall during awards season. A physical copy of the ad has been stored in The Library of Congress, and another will be shot into space on Cinco De Mayo – heads up, Louisa and Pete!

Definition of Keep It Interesante 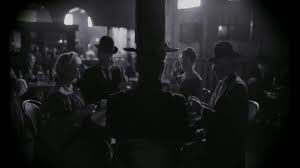 The specific action of taking a morsel of truth and enhancing a story for the sake of keeping friends entertained and engaged – a better version of the truth.

Examples: Don’t bore your friends by saying you wasted an afternoon scrolling through Twitter – tell them you lost track of time while DM’ing with an astronaut. Chased by a dog? More like: barely escaped being mauled by a mountain lion. Stuck in traffic? Try: stuck in quicksand. 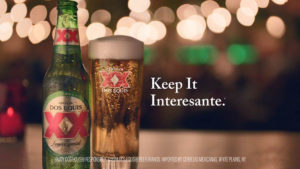 Dos Equis has built a reputation as the most interesting beer on the planet. With the launch of the new Keep It Interesante campaign, the brand is out to prove that “interesting” is not limited to just one man – it’s in everyone.

Developed by advertising agency Droga5, the campaign kicked off March 14 with TV commercials and will be brought to life across social media, digital activations, retail, out-of-home, and at some of the US’ biggest events and cultural moments.

Dos Equis Debuts ‘Keep it Interesante’ Campaign Engineered to be Just a Little Funnier Each Time it Airs added by Newsroom on March 15, 2018
View all posts by Newsroom →