By Newsroom on September 2, 2016Comments Off on Eight Lucky Londoners Selected for a Once in a Lifetime #AbsolutNights Experience

While most people spend Friday morning clock watching, waiting for the weekend to start, Absolut instead tempted eight people to find out what happens if you open up to unexpected experiences and connect with new friends to create an unforgettable night, hosted as part of its #AbsolutNights campaign. 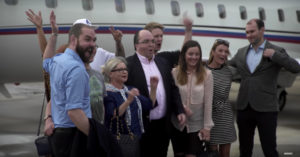 With a focus on spontaneity, Absolut partnered with Uber to offer a once in a lifetime experience to anyone with the Uber app in London. There was one catch; the four users had only 30 minutes to grab their passport, choose a plus one and head straight to the airport. From there they would be flown on a private jet to a surprise destination, which was revealed to be Ibiza – the ultimate summer party location – only after everyone was on the jet.

Fortune favours the brave – and four daring Londoners (and their plus ones) took a chance which paid off. They were:

With a mixture of ages, personalities and backgrounds, the lucky group found out they won at 10am on Friday morning, and with a now-or-never decision in front of them, they all decided to jump into the cars requested through Uber. The eight participants met for the first time aboard the private jet, and were greeted by TV and radio presenter Arielle Free and Absolut’s global ambassador and mixologist Rico Dynan, who whisked them away for the ultimate #AbsolutNights experiences over 24 hours of fun and spontaneity in Ibiza.

Once the jet touched down in Ibiza, the #AbsolutNights experience included a private yacht ride where guests stopped off for a swim in the Balearic Sea, followed by a table at Blue Marlin, one of Ibiza’s most famous and glamorous beach clubs. A quick stop to glam up at brand new 5* hotel OD Talamanca was followed by dinner at open air lounge KM5 and then on to the legendary nightclub Space, for its last season before it closes permanently this autumn. Not wanting to end the night there, some of the guests stayed up to catch the sun rising over Talamanca bay. Along the way, they enjoyed delicious Absolut cocktails, made new friends and created unforgettable memories.

“We had the most insane, whirlwind 24 hours of #AbsolutNights fun with an awesome group of people! We honestly couldn’t have asked for a better group. We kept each step of the trip a surprise for everyone to keep them on their toes and they were ready join Rico and I to take on each surprise head first the whole way through, and I’m not ashamed to say that the guys out-partied us!” says Arielle Free.

A film crew joined the participants to capture this unique #AbsolutNights experience and the surprises, special moments and connections along the way. As part of Absolut’s latest campaign, the film showcases that #AbsolutNights are driven by the spirit you take into nights where anything could happen by opening up and seeing where the night takes you.

“With this #AbsolutNights trip we wanted to bring together and celebrate the very essence of what makes great nights – creating memories by connecting with others. #AbsolutNights embodies spirit you take into nights where anything could happen, and the Absolut crew was so lucky to be joined by an incredible group of people who decided to take a leap and join us for such an epic night.” says Jenny King, Absolut.

Eight Lucky Londoners Selected for a Once in a Lifetime #AbsolutNights Experience added by Newsroom on September 2, 2016
View all posts by Newsroom →